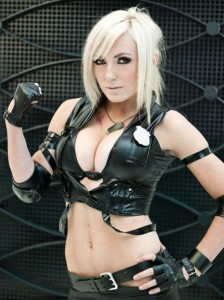 Call of Duty Alexis cosplayed by Jessica Nigri. Nigri was apparently paid $15,000 to wear this outfit to P.F. Chang’s.

“She was meant to be my only one.”

The wailing lament of thirty-seven year old Hell, Michigan native Theodore Spencer reverberates throughout a small hallway of an hourly motel on a cloudy Thursday afternoon. His hands shaky, heartbeat erratic, and ability to contain his saliva within his mouth severely hindered: these are mere side effects of a much more dire event.

Just a couple of days prior, Theodore Spencer was known as Theodore Pupmeet, a happily married online movie critic who had just gotten his smooth, soft hands on a Playstation 4.

The Playstation 4 really is a marvel of technology. The sleek hardware design, cool and convenient operating system, and a promising list of upcoming games…It’s a console like none we’ve ever seen. The first game I bought for it on day one was Angry Birds Star Wars, and…my mind was just fuckin’ blown.

What wasn’t getting blown, however, was his penis. Theodore’s wife, Alexis, instantly grew jealous and spiteful towards the obviously more sexually appealing object in the house, and refused to pay attention to her soul mate. Tensions quickly grew, and the question of the couple’s future began to slowly rear it’s devilish head.

I took the bitch’s last name, for God’s sake! Of course I loved her! We were together for fourteen years! Fifteen if you count the year we met and started dating. She was my ‘Sex Lexus Alexis!’ …We used to fuck in the back of her Lexus and we called it the Sex Lexus, and then I started to call her…You get it.

What was it particularly that led Theodore to stray from his marriage, though? The games themselves? The “sleek hardware?” The fact that you have to pay money for it’s premium services like a prostitute?

It was the graphics all along, international correspondent Cliff Lerma discovers.

I was playing Call of Duty: Ghosts pretty steadily for the first few hours, completely in awe of how realistic the graphics were. Shooting guns in space had never made more sense until then. As I began playing multi-player matches, I realized I could change my avatar’s gender. As a joke, I named my character “Alexis” and began to play as a female soldier. It was a rush, getting to witness my virtual wife slaughtering human beings and medium sized dogs for the sport of it. Before I knew what was going on, my heart raced for this virtual woman. She looked so real. She was so volatile and aggressive, just like my wife in the real world. Except Call of Duty Alexis never hit me, chained me down and slit my thighs, or called my mother and asked her why she didn’t give me a larger bulge. Call of Duty Alexis was a warrior, a fearless killer who protected me and made me feel strong. By the time I had prestiged online, I had already fallen for her.

An affair such as this can never go long unnoticed. It was soon after the love-at-first-prestige incident that tragedy struck. We called in the real, slim Alexis via Omegle to get her side of the story:

Cheaters are people I have no sympathy for, male or female. You know that show ‘Cheaters’ that G4 used to always show re-runs of? Yeah, I used to get off to that show every night. I loved watching the unfaithful get their lives ruined. Imagine my surprise once I found out that Theodore had actually PAID some girl to cosplay as his Call of Duty character and have dinner with him! Some chick named Jessica Nigri or something. Why couldn’t he have taken me to P.F. Chang’s that night? Had he only asked, I would’ve dressed up for him! I would’ve killed dogs for him, too! He was my little love slave and I would’ve done anything to make sure he never called the cops on me!

The nail in the coffin was when Alexis found Theodore fondling himself to the PS4 itself, using the Call of Duty game disc and a printed out photo of Call of Duty Alexis “glued” to the wall. After a series of death threats and thrown Tupperware, the troubled two reached a fair compromise. Theodore would get to keep his PS4, and Alexis would recieve the house, money, and everything else, pretty much. The divorce will be finalized on December 25th, 2013, though Theodore has already dropped the Pupmeet last name.

When asked for final comments, Theodore said the following:

I loved Alexis, I really did, but things weren’t perfect. Now I have everything I need to be happy. Just me, my Playstation, and a copy of Call of Duty: Ghosts.

Correspondent Cliff Lerma inquired just how Theodore planned on playing the game without a television, and was reportedly mugged by the divorcee instantly after. Cliff is now fighting an identity theft crisis. From all of us at VEAG, we wish ya the best, Cliff.