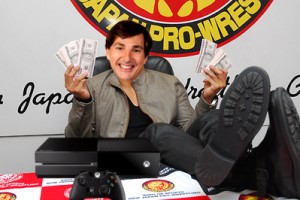 The man himself, seen here at a conference in Japan, taunting the people with two things they’ll never have.

We at VEAG were able to secure an interview with Don Mattrick, CEO of Zynga and, perhaps more notably, former boss of Microsoft’s Interactive Entertainment Business. Within we cover a number of details, including how things are going over at Zynga, his thoughts about Microsoft and the infamous Xbox One, and other juicy remarks you Internet denizens will eat right up. Our freelance correspondent, Lord Pitaya, conducted the interview:

Lord Pitaya: Don Mattrick! Glad to have you with us this evening.
Don Mattrick: Where’d you get that jacket from, a hobo?
L P: Moving on! So, you left Microsoft in the middle of some serious fanboy rage, in favor of Zynga’s job offer. Is there any particular reason why?
D M: Have you seen the money those idiots are offering me?
L P: Can’t argue with that! Moving on, I’d like to ask: where do you think the Xbox One is headed in the near future? You spearheaded the system for months, but we’d like to know your thoughts now.
D M: Ah, that thing? What’s coming out soon, Titanfall? An always-online shooter, saving that platform? Kid, did you see my Twitter feed? So many people complaining like they’re third-world children about the system being always online and you think they’re going to buy this game? That’s rich. Not as rich as me, but I mean, come on!
L P: Have to say, that is pretty funny!
D M: No, man. Rich. Like my bank account. Also, that whole fitness thing? Started as a joke! We already know we’re the American console, so we wanted to cater to Americans, and nothing says American quite like a man who can’t get off his own ass to get the remote. That’s why Kinect’s the way it is with all your devices. Now, we wanted to sugarcoat it, much like our target audience does with their donuts, so we decided to push sports. Football, basketball, shit, the only exclusive lined up this season is a Kinect Sports game nobody’s going to buy. Round it out with guns and what do you have?
L P: Texas?
D M: America, man! Look at the 360, they ate that up despite being inferior in every way to Sony’s box, all we had to do was put ESPN on the home page. Now, you, you’re with a bunch of intelligent gamers or something, right? Yeah, I’m sure you prefer the PS3, you know better. I know better. Have five of them at home. Thing is, America doesn’t. Hell, people bought the Xbox One thinking they could play Grand Theft Auto V on it. $500 thrown at it and they didn’t even read a damn thing. Why should we cater to Europe and Japan when those guys actually read? Takes effort to get their money.
L P: I take it Zynga isn’t much harder to work for, then.
D M: Not at all! Look, between you and me? My coworkers are braindead! These guys haven’t had an original thought in years. They don’t even know what to rip off of without my guidance. They’re drones at my command, and all I have to do is name a video game every so often and suddenly my wallet gets fatter. If making a game takes too long, I’ll spend the spare time suing somebody doing the same thing as us. Speaking of, I have a proposition for Riccardo Zacconi. CandyVille is going to be sweet! Hah, get it?
L P: Rich in flavor, as you’d say.
D M: Ha! Going to have to write that one down, you have a spare $100 bill I could write on?
L P: I’m afraid not.
D M: How much are these guys even paying you?
L P: Anyway, I’m going to have to wrap this up shortly, but we’d like to just hear your thoughts on the gaming industry, where Zynga is a part of it, whatever you’d like to be let known on our site.
D M: Well, this won’t get too many hits, so I’ll be honest. I really want to make video games. I don’t think I’ve actually done any programming work on a game in my life. For crying out loud in only a decade I’ve worked with both EA and Microsoft and I honestly feel like I’ve never made a single video game. Obviously Zynga’s never going to fix this, either. While I was at Microsoft, I wanted to transfer to Nintendo and work on the new Zelda, but Larry told me he’d sic a bunch of fanboys on me if I did that, and let’s face it, Xbox fanboys?
L P: Sounds like quite the terrible fate to meet with.
D M: Worse than death, man.
L P: Worse than being poor?
D M: Don’t push it, buddy.

Mr. Mattrick was kind enough to give everyone at VEAG a new blazer in return for us omitting a portion of the interview where he admits to convincing Steve Ballmer to name Stephan Elop the new head of Microsoft’s Devices and Services division as one last “fuck you” to gamers before leaving to Zynga.