SANTA MONICA, CA – In this day and age, finding an effective way to market a product is more paramount than ever for companies that have a lot riding on their bread and butter. Recently, you’ve probably seen the new Coca-Cola cans and bottles that try to get people to buy an extra soda by “Sharing a Coke,” with their friends and family. Of course, the names are randomly added to the packaging, but it’s the jolt of excitement when you find yourself or someone you know emblazoned on the front of a Coke bottle that gets the upsales. Instead of buying only one Coke, or none at all, people think it’s kinda funny or cool to see their name, and they totally are gonna get a bunch of likes for it on Facebook or Tumblr, so the transaction is made. It’s worked quite well, as if Coke needed help selling, but that sort of personalized marketing has caught the eye of the Coca-Cola of gaming: Activision.

“Coca-Cola has been a staple in American culture for over a century now, and I believe that is for a reason. Every era of the company’s advertising has been different, but memorable. The polar bears, the slogans, the endorsements, it’s all genius. Their latest idea, though, might be the best one yet. Share a Coke with Chip. Share a Coke with Joe. Share a Coke with Demosthenes. It gets people talking. ‘Oh, hey, I found you! You should get this Coke!’ It’s perfect. And I want it for Call of Duty. I hope that one day, a hundred years from now, people can say that our little game that could is also a staple in American culture. That’s why it is with great pleasure that I announce the Advanced Warfare ‘Share a CoD’ campaign. Every box art will feature a different person’s name, and will ignite a flame of personal happiness for everyone who owns their special copy.”

Immediately after, Kotick pulled out a magician’s hat, and inside of it was the first ever customized Advanced Warfare box art. It was the same cover that we’ve seen before, but I felt something strange come over me. The box said, “Share a CoD with Emily.” My sister’s name is Emily. I wanted to buy the game for her so we could play together. 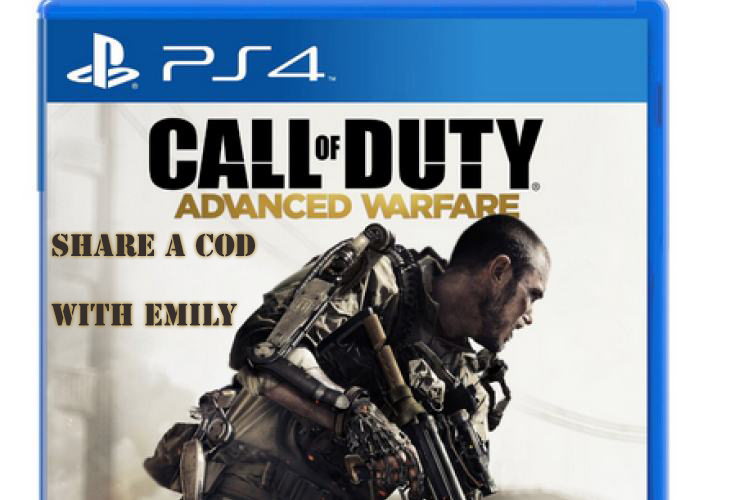 I wonder if they’ll make one that has my name on it…I’d love that!