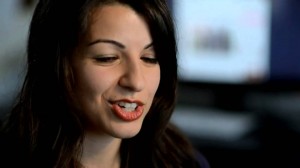 She’s actually kinda pretty, just don’t ever tell her that. It’s an insult.

SAN ANTONIO, TX – Gender roles. Sexism. Patriarchy. These buzzwords are at an all time popularity in gaming journalism these days, and nobody has done more for that cause than Women’s Writers Activist Anita Sarkeesian.

Thanks to crowd funding services like Kickstarter, Sarkeesian has been able to make a big splash in the video game world through incredibly detailed research and professionally edited Youtube videos. Making over ten times her original goal of $6,000 to make the videos when she asked the internet for financial assistance, she used the extra money to do research in the Bahamas. When questioned about her methods of info gathering, she claims using Wikipedia and 4chan from the comfort of a sunny beach helps maintain mental clarity when viewing such damaging statistics pertaining to female oppression in video games.

Now she plans to take the fight straight to the source. It has been confirmed that Anita Sarkeesian is in works with EA to contribute to the development of a sequel to the cult classic video game, Mirror’s Edge. Her internet skills and hired video editors will undoubtedly be an incredible asset to the Electronic Arts team as they develop the parkour/FPS hybrid. But why Mirror’s Edge 2, of all games? Let’s ask the femme fatale herself.

I’ve put so much effort into destroying female tropes in video games in recent years. The portrayal of females being obsessed with fashion, pink bows and girly colors is inaccurate and prevents individuality. That being said, I love mirrors. I love looking at myself in the mirror, and making myself pretty before I shut shit down against the patriarchy. Kicking ass in style, as they say. When I saw a game with ‘Mirrors’ in the title, I just couldn’t resist. Then I found out the game has a female protagonist and I was sold instantly.

With such a strong female figure on the Mirror’s Edge 2 development team, we here at Video Entertainment Analysis Group have no doubts that the game will be runner-up for GOTY material.