CUPERTINO, CA – It’s an idea that’s been on everyone’s mind for a while now, and after about a year of rumor and speculation, Apple has just announced that they will finally be releasing their first console. The name was just announced, a name no one saw coming, the “iConsole”. People suspected that the name would be “iPlay”, like last year’s IGN parody (of which heavy lawsuits were involved), but Apple wanted to step away from predictability and deliver a name their fans wouldn’t suspect.

While nothing has been revealed on the specifications of the console yet, we were told that there will be 3 versions out before the release of iConsole 2 in 2015, each version with different sized storage (8GB, 16GB, and 32GB). These will most likely be the iConsole, iConsole S, and iConsole 3G (which has telephone and texting capabilities). Prices 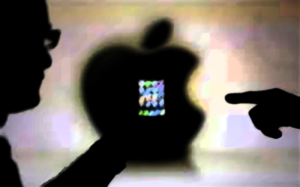 Consoles are their next target… Afraid yet?

are estimated to start at $699.99 for the 8GB model, increasing by $200 for larger storage models. Though many are becoming doubtful if this will be a success or a flop with the other details released, such as the special Apple-to-HDMI cable (priced at $79.99), and download only titles off of the Apple Store. Not to mention you have to use your iPad 2 or iPhone 4 (or above) as the controller, which is something a lot of people have been complaining about. If you want to play online you’ll need a 1 year iLive subscription.

At this point you’re probably asking yourself, “Why would Apple bother releasing a console like this? How will they compete?” And that is what we are here to answer for you. Apple has recently made a wealthy amount of patent purchases which included consoles that need a type of controller to play game, a console that has game playing capabilities, consoles that can connect to the internet, consoles that use electricity, handheld gaming devices that use batteries, AC adaptors, and rechargeable batteries. Even more they have purchased every major game developer including many 3rd party developers. Apple has said they don’t plan on using many of these patents in making their own console, but as the head CEO of Apple has quoted, “It will keep our competitors from stealing our ideas or our market.” He then finished by saying, “It shouldn’t matter what our competitors think. We had these ideas long before any of them even began to imagine them, so now we are setting things right by taking back what has always been ours.”

It is expected we can see the first iConsole release to be around Summer 2014. It goes without saying; all Nintendo, Playstation, and Microsoft consoles (handhelds included) and all associated games and software will be pulled from shelves, eStores and will be banned from being sold in the US or Canada. Apple is slowly working this ban to extending countries as well.

What are your thoughts on the iConsole? Think Apple is being a bit unfair? Let us know what you think in the comments. Until next time.