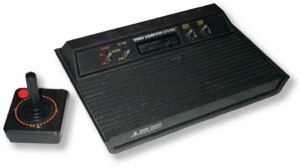 PARIS, FRANCE – Atari, SA have been struggling to make ends meet for the past ten years. Just last year, the French company filed for bankrupcy, as did its US subsidiaries. However, Chairman of the Board Frank Dangeard is determined to keep the company afloat at any cost necessary. In fact, his announcement to Atari’s Board of Directors caused quite a shakedown: he wants to return to the console-making business, and investors are far from happy about what they describe as a “sink-or-swim” move.

Our foreign correspondent Cliff Lerma sat down with Frank Dangeard to learn why he has made this decision. “The Atari brand is still strong,” the Chairman said. “Our biggest seller for the past five years has been the Atari Flashback. Why do people love the 2600? Because of its simple, yet addictive games. That’s why I’m proud to start Project Sabre, continuing on our tradition of naming game consoles after wildcats. I can’t reveal all specs, but it will run a quad-core 64-bit processor with a Linux-based OS, and games will run off of a proprietary SD card format.”

Cliff asked then asked Mr. Dangeard why he was making such a risky decision. “As you know, our company is having monetary problems. Right now, we need to do whatever we can to draw in new investors, create new jobs, and sustain the jobs we already have. I have faith that our customer base will enjoy a new Atari system, with new entries into the Missile Command, Yars Revenge, and Berzerk series. I mean, the Sabre even has the old woodgrain finish!”

Upon hearing this news, Sony’s CEO Kaz Hirai fell out of his seat and bruised three ribs. We were able to conduct an interview with him from his hospital bed. “P-PLEASE, DON’T MAKE ME LAUGH ANYMORE! IT HURTS! AHAH- OOOOOOW!” said Hirai. “I mean, Nintendo and Microsoft are even having a hard time keeping up with the PS4 right now. What makes those losers at Atari think they can touch us?” Kaz Hirai then fell out of his hospital bed from laughing, bruising yet another three ribs, and breaking one he had previously injured.

Only time will tell if Atari’s risky business decision will draw in money and new investors, but should they make a mistake, this could be the end of the company as we know it. As for Sony CEO Kaz Hirai, everyone at the Video Entertainment Analysis Group wishes him a speedy recovery.