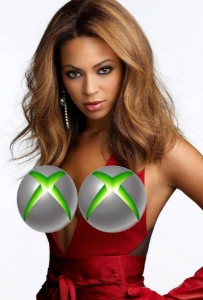 If you like it, better put a red ring on it.

COMPTON, CA – Today, in an un-televised gaming journalism conference in the hood,  Beyonce Knowles surprised the world by announcing the newest entry in the Xbox line of game consoles, the Xbox Two. Xbox Live’s Major Nelson was available to comment with the following:

This is huge news for gaming fans. Now that the Xbox One has landed on store shelves worldwide, Microsoft decided to spill the beans on the newest way to play Xbox. Xbox Two will be an entire console based solely on the Cloud system. I suppose your One consoles are extra-forward compatible!

The enthusiastic middle-aged man laughed and asked me to scan the QR code on his shirt with my smart phone to get more information on the “console.” The square code was right over his nipple though, so the bump made it a little hard to scan, but once I was able to, there was a really slick series of six-second Vines that displayed nibbles of statistics and promises that the Xbox Two hopes to follow through with.

Unfortunately, the specifics are classified, but a rough summary would imply that the console is online-only, must always be turned on, and a Kinect Two is included in the package deal. Kinect Two seems to be a series of hidden cameras that Microsoft representatives will install at various spots in your house to expand on the already realistic audio/physical interactive motion gaming experience. A Mountain Dew Dispenser by Mad Catz is also in development.

In side news, Beyonce was chosen by Microsoft to make the announcement because she has a song called “Halo,” and since has been confirmed to be singing the entire soundtrack for Halo 6. Jay Z is rumored to replace Jeff Steitzer as the multiplayer announcer’s voice.