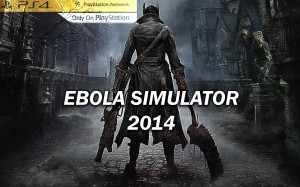 Bloodborne is turning out to be somewhat of a secretive game, details being very hush-hush at the moment of major plot elements, or similarities to the predecessors, the entire Souls series. However, one thing is very clear; Bloodborne was created amass the shrill screams of those dying from ebola. Miyazaki was shocked by this epidemic, and instead of making the game focus on the concept of souls on previous titles, it will instead focus on blood. “It was a very divisive concept when I first introduced it to the team,” said Miyazaki, “but we’re sure the social commentary resonating through every pore of this game will make humans take these issues more seriously.”

“The citizens of Yharnam are horribly infected with this disease, and so is the player character. The player character will have to flush the virus out of his body, before it slowly kills him over a period of time. The player must make their pilgrimage through the ebola-ridden land quickly, or perish.”

The game, upon release, will come with the Bloodborne game CD, an instruction manual, and a pamphlet containing measures to successfully prevent an outbreak of ebola, ranging from the safety in your home to sanitation in public.