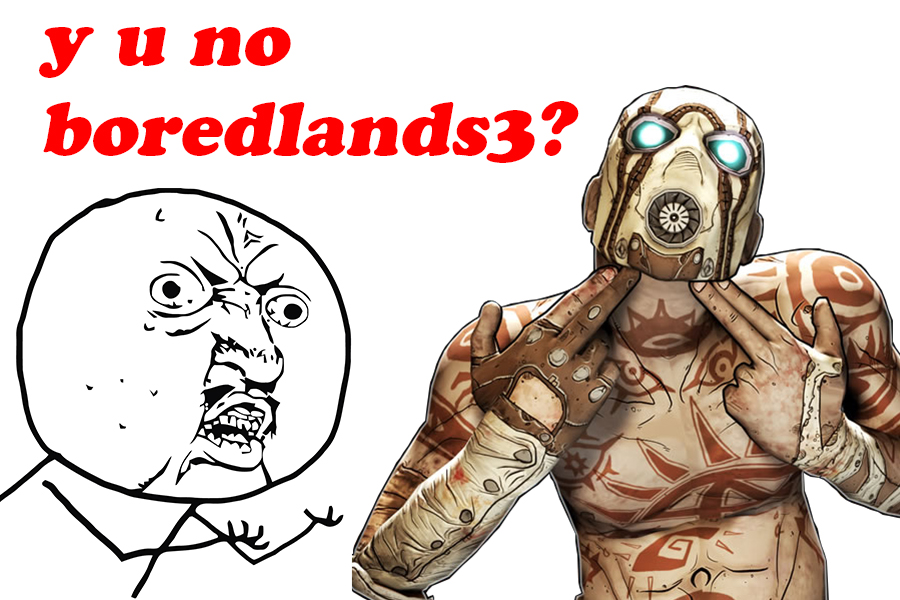 CHICAGO, IL – There seems to be a lot of anticipated “3’s” for gaming fans these days. Some might have the gall to say that it’s because of the industry’s lack of creativity, but we all know that’s a load of potato toppings. Many gamers want to play a Super Mario Galaxy 3, a Half-Life 3, or a DmC 3, (We’re skipping DmC 2 because the original Devil May Cry 2 sucked) but one of the last generation’s biggest new IPs is now expecting a threequel. Borderlands captivated pre-teens everywhere, with it’s attractive female characters, butt jokes, FPS gameplay, and most importantly, it’s memes. Memes were an integral part of the Borderlands 2 experience, says director Paul Hellquist.

“When we were sitting at the round table in our writers’ room, there was a lot of conflict between the staff pertaining to how exactly we’d glue all the pieces of Pandora’s story together. A few of us wanted a deep, cleverly narrated story with a progressive message, others wanted cameos from other franchises along with sex scenes, but we ultimately decided on using internet meme references. Memes -made- Borderlands 2, and without them, it would’ve been just as fuckin’ boring as the first game. That, and we added more hot girls like Lilith and had them flirt with Mad Moxxi. She had huge tits and a heart on one of them so I think it really helped drive sales.”

Borderlands 2’s main producer has confirmed that Gearbox would love to make a third game in the series, however, the time just isn’t right. Why is that? The new consoles have just been released, and the consumers are starving for new content for their investments. Striking while the iron’s hot would be a sound business decision, but Randy Pitchford claims that it’s just not possible at the moment.

“I’ve spoken with Paul (Hellquist) extensively these past few months, and he agrees that we should wait for a while for the next major installment. He told me that all of the memes have been used up in the main game and the extra two years’ worth of DLC; there’s just no more new memes to base Borderlands 3 on. I mean, yeah, there’s those new Valentine’s Day cards, Loki reaction images, and Doge, but three memes just isn’t enough. We used six memes to create the entirety of Borderlands 2’s main campaign, then added more memes for the DLC. We may have to dip into the African-American meme community or even the foreign meme side of the internet if we even want to start on Borderlands 3. Stay patient guys, it’s coming, but we’re also depending on you. Give us something to work with…”

VEAG wishes Gearbox the best of luck with their search, as well as with their rebooted reboot of the Aliens franchise. Stay locked on to Video Entertainment Analysis Group for the latest news for all your favorite Borderlands games, including the totally necessary Telltale spinoff.