I was really looking forward to this game when I first heard about it, and after playing it, it did somewhat live up to my expectations… until I did some research. I’ll explain in a bit. From the famed creator of the Dragon Quest franchise Akira Toriyama, Level-5 brings you a whole new kind of fantasy adventure in Bravely Default. While playing I noticed it took more elements from the Final Fantasy universe than the Dragon Quest universe, but looking past that the game was quite solid. There was one glitch in the game where during the opening cutscene if you press start, it skips it! Minor, but at least it’s not the glitchiest fantasy RPG I’ve played this year; Ni no Kuni takes the cake for that.

Another thing that should be addressed is the fact that you need a 3DS in order to play it. Yes, I can hear the groans already. “No one plays 3DS. It’s just a DS with 3D. What a waste of money!” is a complaint that is valid enough in its own right, but Nintendo paid Level-5 to make this a 3DS “exclusive”. That means you probably won’t be seeing a PC port of this on Steam any time soon; as Nintendo tried to pull the same crap with Resident Evil Revelations. 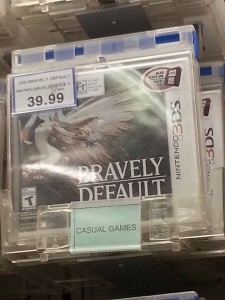 Toys R Us knew where the game belonged without even having to play it.

Now, before I break the game down, it’s time you heard the sad truth about this game, which will be reflected in the final score. It’s CENSORED for American release. You heard that right; Nintendo wanted to market this game to casual game playing children overseas. Shocking they didn’t get Disney to develop the game instead. Bravely Default is a pretty bold name for such a cowardly game that supports slut-shaming, female oppression, and patriarchy. The main females in the game, Agnès Oblige and Edea Lee received massive costume changes that affect your entire experience with the game, as detailed in the provided image. Not only did the make the costumes less revealing, but they changed their ages from 12 to 20. 12 year old girls should be able to dress in as little clothing as they want without having to face slut-shaming oppression and discrimination from men who create video games that represent them. Characters in a game titled “Bravely” Default should NOT be made to feel ashamed on their bodies. But now it is time to break down the game so you can determine if it’s worth playing or not.

Gameplay:
Since it copies more elements from Final Fantasy than Dragon Quest, I’m going to have to deduct a couple points for unoriginality, but apart from that the combat system works relatively well. My only real complaint is that you have to take turns to attack, which in my honest opinion is an outdated gameplay element. Would it have been so hard to just implement an attack button so you don’t have to wait? For examples sake, let’s just pretend this game came out 20 years ago; meaning the combat is good and fresh. Apart from that there is not much gameplay other than moving from town to town, which is pretty boring and outdated in itself (a location selection would have been nicer), but it’s not much of an issue with the good music to keep you company.
7/10

Sound:
Playing this game and listening to the music you are probably thinking the same thing I did. “This does not fit the game AT ALL, but man do I enjoy it!” That’s because embarrassingly enough, Akira Yamaoka (composer for Silent Hill) accidentally made the soundtrack for this game, thinking he showed up to his other gig, making music for a Lollypop Chainsaw sequel. The results were so good that they paid him for his trouble and kept the music in the game. I don’t feel like I’m playing a Japanese RPG, but boy is he ever a god on the guitar! Apart from the music, the voice acting is surprisingly well done, even though they forgot to translate and dub over the voice of Ringabel. Unless you speak both English and Japanese, it’s impossible to know what he’s saying, but his part in the games story is not that important.
9/10

Story:
Since this game is a Japanese RPG, having a good story is usually something that is safe to expect. While the story in Bravely Default does not let you down, it does leave something to be desired. The characters are relatively well written, but as previously stated, they forgot to translate and write English dialogue for Ringabel. His part in the story is of little importance, so don’t feel like you are missing a lot of content. What I had meant by the “leaves something to be desired” line is that they leave the game open for a sequel. It would have been a cleaner ending if they tied that up. We don’t need a Bravely Default 2.
7/10 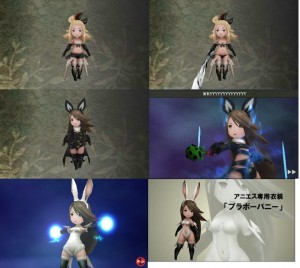 Graphics:
This is the part of the review where the game loses the most points. It’s not the fact that the graphics could have been pulled off on the regular DS without the dumb 3D Ninten-gimmick, but it’s the censorship I had mentioned before. This game would have felt a lot less watered down if the girls in the game were 12 and showed a lot more skin. The game creators wanted it that way for a reason; Nintendo of America should have butted out. All in all, the game does look quite nice, though you can do without the 3D, as it adds nothing to the experience.
2/10

Overall:
I really would like to give this game a higher score, but I’m afraid I cannot press myself to do it. This review is fair and is all the game deserves, to be honest. Above average dated gameplay, great unfitting music, a subpar story, and graphics that would have been okay without the sexist censorship. I don’t have a whole lot more I can say about this game. It was enjoyable to an extent and did what it could despite the hardware limitations. A fresher experience would have been appreciated, but it seems like they had no sense of direction with what they wanted to do with this game.