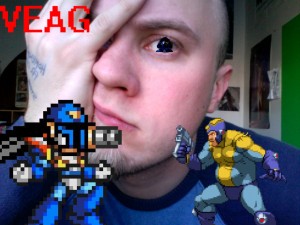 DALLAS, TX – It seems in one of the most interesting breakthroughs in video-gamer history has occurred today. Brentalfloss, comedian, musician, YouTube aristocrat, and all-around rockstar, has finally figured out there are more games in this world than the NES hit classic, Mega Man 2.

“It’s like a whole different world out there,” said Brentalfloss. “I didn’t even know there were more games, there’s even Mega Man sequels!” he said, jumping up and down like an excited child during Christmas.

Some of the games we played with him, just to get him caught up on Capcom’s latest state of affairs, started with Dead Rising. He seemed to have enjoyed it. He was quoted as saying “you can even get the Mega Man armor in this game, dude! With the megabuster! Dude, this is seriously so cool. And it’s not 2D anymore. It’s like the game is actually popping out at you. What have I been missing out on?”

It was revealed that, as a child, Brentalfloss suffered from a temporal brain issue. “I just…couldn’t play new games. And if I did play them, I didn’t even remember their existence. The only thing that was on my mind,” he started sobbing, “the only thing that was on my mind, was the game, Mega Man 2. It was my first game as a child. I played it before the…accident. I can’t even remember what the accident was, but I think it involved trying to use the NES as a toaster.”

As Brentalfloss cried, we here at VEAG tried to console him the only way we could: With more videogames. It seems this was the best kind of therapy for our golden boy. Keep making songs, cowboy. And this time, you’ll be able to do it about different subject matter. We’re proud of you, star.

– The Hottest Member of VEAG, Shane