OSAKA, JAPAN- The folks down at Capcom seem to have put themselves in a bit of a bind in the past 24 hours with their release of Resident Evil 4 HD on Steam. If anyone cares to remember, the original PC port of RE4 was a total disaster, and with modern technology, screenshots, gameplay videos, this port looked to be a godsend that would run at a constant 60fps! The hype was real and everyone was rejoicing, including the staff at Capcom.

As the 28th approached, fans of RE were counting down the seconds on their clock to release time… that’s when Capcom’s president, Kenzo Tsujimoto realized that they forgot to actually make the port! They forgot that it was just an idea and that it was all talk, and above all else, their fans were counting on them. Not to mention pre-orders were through the roof and they already made a fortune off of people who were expecting a game. Pleasing the fans has always been the top priority to Capcom so they were certain to put the most care into making the game happen as soon as possible. We managed to get a statement from the president a few hours before the release while he was eating dinner at his home. 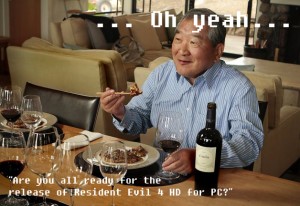 Kenzo realizes this is something he should have told people ahead of time.

“…Oh yeah… We got so wrapped up in the hype ourselves that we completely forgot to make the port! It was already the 27th and the release was scheduled for the next day, so instead of pushing back the release date, we knew we were up to the task of giving the fans exactly what we promised. This will be the definitive release!”

Now the day is nearly over and already, like you most would have expected, fans are complaining from every corner of the earth. Disappearing textures, flickering lighting, slowdowns with off-sync audio, blurry text, green flickering between certain cutscenes, no subtitles, misleading menu options, and no aiming sensitivity options are just a few of the problems players are experiencing so far. No word from Capcom yet if any of these problems will be patched.

Has the release been a disappointment to any of you as well? Tell us your thoughts in the comments, and remember to stay smart, fellow intellectuals.