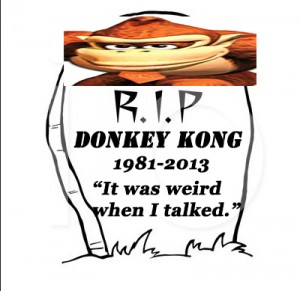 HONOLULU, HI – Sad news today for all you monkey freaks out there. A recent video was taken down from popular video-sharing site, Youtube, for potentially spoiling an upcoming Nintendo game. Youtube is normally a safe haven for any sort of copyrighted content to be shared without permission, so for it to be removed without even getting Ad-Sense integration sans profit for the user means it’s likely a major concern. Being a little more than curious, we decided to send VEAG correspondent Cliff Lerma to investigate, and what he brought back for us nearly took our breath away.

The banned video reveals a graphic and shocking cutscene from the upcoming Retro Studios title, Donkey Kong Country: Tropical Freeze where protagonist Donkey Kong is apparently dying in the arms of his life partner, Diddy Kong. It’s unclear what caused this tragedy to occur, but one particular moment of the scene was genuinely heartbreaking. For mere seconds, Donkey Kong’s primate-like groans dissolve into the pristine voice of Richard Yearwood, the actor who portrayed everyone’s favorite gorilla in the critically-acclaimed Donkey Kong Country animated television series. DK whispers gentle sweetness into Diddy’s ear, but the sound is nearly inaudible. Thankfully, Cliff’s team of expert hackers were able to delve into the video’s source code and find a set of subtitles. Now, when we re-watch the clip, a single sentence fades in alongside Donkey Kong’s dying breath:

What could this possibly mean for our hero? Some Donkey Kong experts consider this a commentary on how people take so many risks for the sake of popularity on social media trends. Others think Donkey Kong has simply lost his touch, rather literally as he failed at swinging along vines, leading to his also rather literal downfall. Looks like we’ll all have to play the game to uncover the truth. Either way, it’s sad to see him go. We’ll miss you, DK, you truly were the leader of the bunch. We knew thee well.