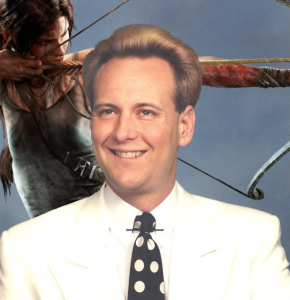 The face of a genius.

LOS ANGELES, CA – Though Square Enix doesn’t have much of a presence this year at E3, aside from the highly anticipated Kingdom Hearts 3 and Final Fantasy 15, there’s one franchise fans and critics alike have on their radars: Tomb Raider. Though last year’s reboot to the franchise only sold around a million copies, this year’s Definitive Edition for the next gen consoles fared far better. Because of this, they’re no doubt looking to expand upon this action-survival franchise in ways that will appeal to a bigger audience. And sure enough, at a special private presentation, we learned the future of Lara Croft’s adventures before the general public.

This presentation, which was only open to select press representatives chosen from a drawing, turned many heads. Were Square Enix planning to release a new intellectual property? Would they reboot an old one? No one was sure what to expect. But no one could have expected what we were about to see, as it was an idea so brilliant, so revolutionary, that only two men could have thought of it. One of them is Sir Troy Baker, but he wasn’t the one to deliver this message from gaming heaven. However, the man that did will be written down in history as the most creative mind in video gaming.

We have a challenge to EIDOS. In Tomb Raider 3, create a storyline in which Lara gets breast cancer. Imagine the drama of a vulnerable Lara Croft still persisting on her worldly adventures despite her illness. It needs fleshing out, no pun intended, but we guarantee the gaming world would be shocked, stunned, and moved by the effort to make Lara’s character more meaningful.

“These words, uttered by George Wood, have been stuck in our heads at Eidos since he issued the challenge in 1997,” said game director Noah Hughes. “Though the staff that has worked on the Tomb Raider franchise has changed in the past 17 years, our ambitions to meet this challenge hasn’t changed. Due to technology limitations of the time, we couldn’t implement such an integral part of the gameplay into Tomb Raider 3, or any of the following games. However, this is 2014, we have the skill, and we have a talented team that can finally make this happen. That’s why we at Square Enix and Crystal Dynamics are proud to announce Rise of the Tomb Raider, an adventure where Lara Croft must rise above adversity, in the forms of treacherous tombs, as well as a ailment that threatens her life.”

Following this introduction, script writer Gail Simone took the stage. “For years, I’ve written comics with strong female characters. That’s what made me a fan of the Tomb Raider series to begin with. And now, I get to put Lara in a situation that will be her biggest struggle yet. Rise of the Tomb Raider is unique because Lara has to overcome obstacles an enemies on an uncharted Polynesian island located in the Tropic of Cancer. The longer you play the game, the more ill Lara becomes, so the game is a big race against the clock to get back home.”

Finally, the man behind the idea, George Wood, took the stage. “When I started doing my TV show, Flights of Fantasy, back in 1993, I had no idea my ideas would come to fruition. When NAVGTR.com picked up the series in the mid-2000s, that’s when all my creative genius finally started getting noticed. I was so overwhelmed by the response I got that I had to go into hiding for a couple of years! But when Square Enix called me last year, and said they had finally accepted my challenge, words couldn’t express how happy I was. Between this and more Donkey Kong games, if I could get Sony to finally make my game where you drive your pregnant wife to the hospital, all of my life’s goals would be complete.”

You can call him a boob, but George Wood clearly wants more-bounce-to-the-ounce for the video game industry. And Square Enix’s accepting the challenge shows that they’re abreast of the industry at large. Hopefully this is a sign that video game companies will stop milking old ideas, and instead squeeze out new and innovative ones.