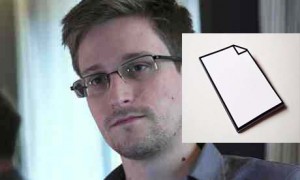 Fans of games like Super Mario Bros., Little Big Planet, and the destruction of the twin towers on September 11th, 2001 will surely be excited to play this new indie classic.

ARKHANGELSK, RU – The opportunistic exploitation of Edward Snowden’s complicated tale continues, as the gaming industry plans to make a pretty penny off of a platforming game starring Snowden himself very soon. The working title is Snowden’s Run and the first footage of the game is expected to be revealed this year at the Electronic Entertainment Expo in San Diego, California. The only visual evidence of the game was provided to us by an anonymous source, who insisted that we keep their identities a secret because they were apparently spying on other game developers to steal ideas. What our programming team received at the VEAG HQ was a short, timed demo of the Snowden’s Run beta.

Foreign Correspondent Cliff Lerma was locked in a room to play the demo, following the instructions included with the package sent to us, and what he reported was quite surprising. It appears the game, or at least the demo, will be an 8-bit indie side scroller that features a pixelated Edward Snowden sneaking around different countries of the world, collecting floating government documents like coins, a la Mario. Lerma says that if you collect enough documents, you receive a phone call in-game from a secret informant asking for you to deliver them. This immediately sends the player on a high speed chase, racing past American spies and the local police force back to the beginning of the level so Snowden can upload the files via his laptop. After completing the first two levels, the demo apparently shut down on it’s own and deleted itself, leaving the TV screen with nothing but a haunting message:

Blow the whistle, or die in silence.

Needless to say, this game will most likely be a heavy hitter at E3 2014. Stay tuned to VEAG for all updates related to Snowden’s Run and all your other favorite fictitious media based on geo-political terrorist threats.