“At Ubisoft, our goal is to provide players with authentic experiences that reflect both their wildest dreams and the reality in which they reside. Primal’s goal was to be a rollercoaster time machine of sorts, to take us on a journey back to where language was in it’s infancy, and humanity’s core instincts were the driving force behind their actions.”

Far Cry Primal producer Vincent Pontbriand takes a sip of his Arizona green tea. His eyes tell us the whole story; the man has truly poured his heart into this game. The history of our species obviously means a lot to him. He takes another sip and puts his hand on his chest, stroking the woolly mammoth that stands tall on the cover of his latest masterpiece.

“Everyone on the team got one of these T-shirts,” Pontbriand whispered, “…everyone.” 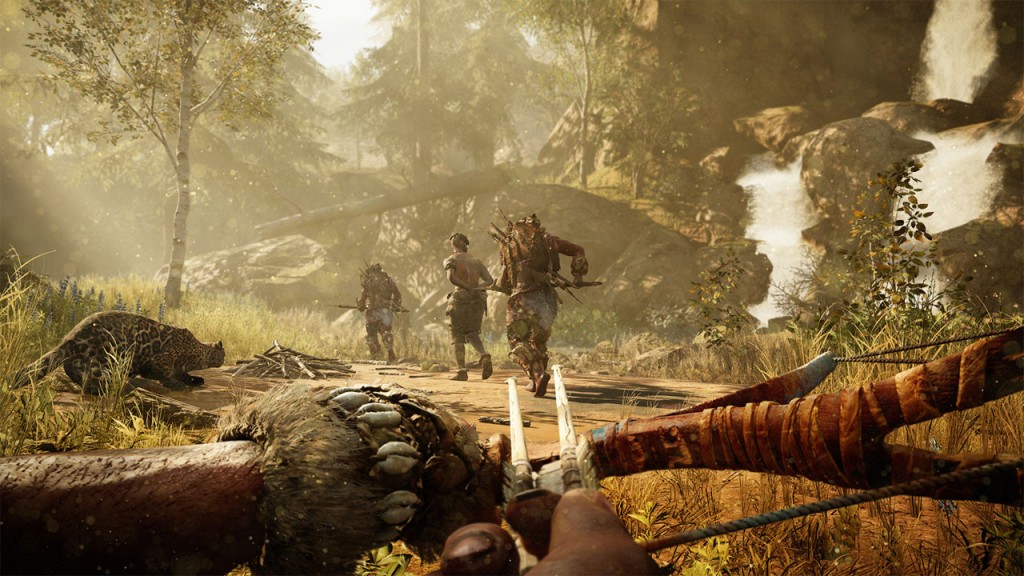 Before Mountain Dew: Far Cry Primal sends players to a place we’ve always wanted to be. A place where we can’t shoot guns or wear the freshest Alexander Wang threads.

In Primal, you are Takkar: a white man with a big beard and a full head of hair who is stranded in the wild after his crew is ambushed by a bunch of monkeys or something. Stories in video games don’t really matter, so I just skimmed the Wikipedia page real quick. There are no guns in Far Cry Primal, only your wits and a slew of melee weapons and animals you can tame and use to kill people instead. Sounds like a (non-explosive) blast, right?

Well, once you get done running around the map and taking over outposts and gathering flowers and shit like you do in every Far Cry game, Ubisoft has a bit of a surprise. Imagine taking that pre-civilized male character and putting him in a modern setting. Set him up on social media and let ’em loose. What do you think will happen? Pontbriand and company had that same question.

“Once you beat Primal’s main campaign, we know that there will be players who still yearn for more content,” the producer explained, “…so we set up a season pass thing for DLC, of course. That will be an additional $60. But aside from that, aside from the pre-planned DLC that could’ve been included in the main game, we have a bit of a twist in store. We thought, ‘why not let Tekkar try his hand at talking to girls online?’ and the results made for very intriguing gameplay. Primal shows off pre-historic man at his prime, pun intended, but we also have created this present day ‘what if’ scenario. I love being a game producer! Wow!” 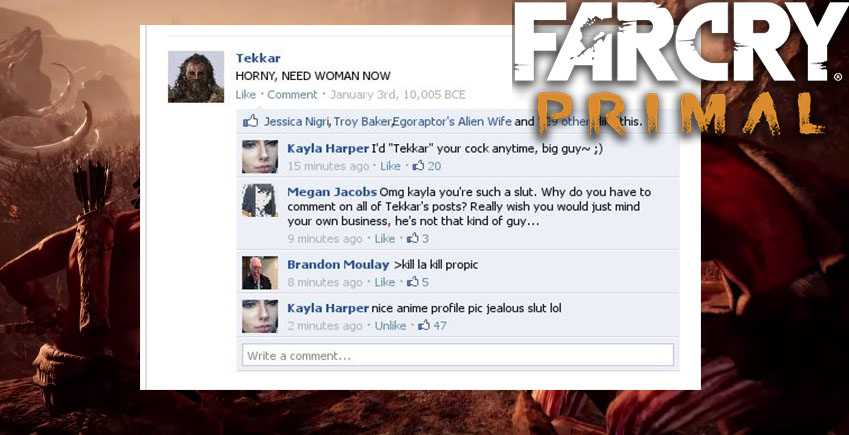 With enough time, Tekkar can become “Facebook Famous,” causing a role reversal where lonely women hit on him instead.

If you use social media in any form and your privilege allows you to have some female friends, there’s no doubt you’ve seen the lonely, single, and probably middle-aged-or-older men hitting on them when they post selfies, but otherwise never interacting with them. That sort of brainless barbarian behavior goes right along with the themes of Far Cry Primal. In a way, those men are the true spiritual successors to the feral and unintentionally anarchistic cavemen of 10,000 BCE. Reacting solely on their desires to mate, these men use cutting edge technology to metaphorically grunt, thrust and dry heave their way into the hearts of likely underage teenage girls.

Ubisoft intends to emulate this phenomenon in Primal’s endgame, allowing rational human minds to make the jump into a simpler, more impulsive brain. For every like Tekkar gets on his suggestive comments, he gains a certain amount of experience points. As he levels up his social media skills, his comments can become more and more subtle, possibly even subtle enough to not be seen as creepy and thus will be rewarded with a private message from the girl he’s courting.

And as guys, we all know that there’s nothing more rewarding than passive female attention on the internet. For the latest updates on Far Cry Primal and more, never leave this website. Just keep a tab open at all times.