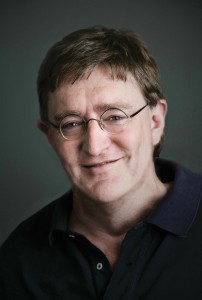 BE, Washington – It has been purported that Gabe Newell, managing director, co-founder and idea man at Valve, has totally went bonkers. From what was originally reported as rumors, these crazy claims have been proven to be true; Gabe Newell, while the game was 37% completed and still on life support, took the remaining money to splurge on his dreams of nipple piercings, liposuction, and plastic surgery. “It was a very rewarding experience. Although we’ve put the game on indefinite halt from spending the rest of the pocket change on everything that wasn’t game development, we’ve come up with no more money. But we are releasing Ricochet 2, and we’re expecting that to be a real sleeper hit. It better be, because it’s our last trump card in the deck.” said Gabe Newell, with a tone of false sincerity and sadness in every word he spoke.

“It was a fucking stupid idea,” said Bob Boisel, disgruntled employee and office cynic at Valve. “I mean, seriously. We were actually making progress. I finally rigged the model for Alyx and gave her new animations. I mean, we’ve been using the same engine, the exact same goddamned engine for the past years, and I’m expected to be the savior of this game? While Gabe goes out and wipes his ass with our hard-earned cash? I couldn’t believe it.” Boisel commented with scathing malice. It wasn’t that surprising when we found out Boisel was fired from Valve last week. He doesn’t seem like a fun guy to be around.

Gabe Newell expects Ricochet 2 to strike Valve rich and revive the weakened company. “I’m predicting a huge surplus in money and people complaining about our sequels on forums! But the fat jokes, I’m not really looking forward to.” Gabe Newell wants to host a huge office party filled with strippers in Chell jumpsuits and prostitutes dressed up as Alyx. Ricochet 2, he says, will help them accomplish this big blast.

Author: Shane, a hopeless romantic and lonely drifter without a girlfriend at VEAG, living alone on Valentine’s Day.