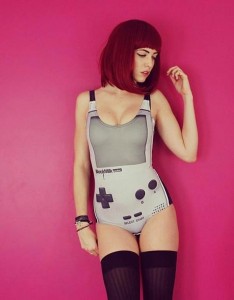 “Now those are some buttons I’d like to press.” That’s something a chauvinist pig would say, and totally not me.

MADISON, WI – Yesterday marked a very important day in video game history: 25 years ago, Nintendo released the
Game Boy, a handheld console that singlehandedly revolutionized the handheld video game industry. Or, that’s what they want you to believe. I’ll be honest, I never owned a Game Boy. I never grew up with one. So to see what all the fuss was about, this past weekend, I went out and bought one, along with a couple of games. What a huuuuuuuuuuuge mistake. Within the first couple of minutes, I was bored to tears.

So I got to wondering: why was the Game Boy so popular? The Atari Lynx and the Sega Game Gear were far superior. Granted, I never played those either, but at LEAST they had color! And if the games were in color, by proxy, the gameplay had to be better as well. As for the Game Boy, I could not see why people in the late 80s and 90s would have chosen this piece of crap over the other two. So to celebrate the Game Boy’s 25th Birthday, I’m going to list 25 reasons you should stay away!

1.) No color! The NES had color, and I’m pretty sure this uses the same processor, so why not, Nintendo? People had to wait 10 years for that? Laaaaaame!
2.) Terrible graphics. The Sega Genesis came out in 1989, and so did the TurboGrafx, so there’s no excuse for these not having 16-bit graphics.
3.) No online play. The internet wasn’t popular yet, but if Nintendo was so “revolutionary,” why didn’t they think of this?
4.) The battery life sucks.
5.) NO RECHARGEABLE BATTERY! I don’t care if rechargeable battery technology hadn’t been perfected yet, if it had a big bulge on the back of my Game Boy, I wouldn’t care.
6.) It’s too damn big, I can’t fit it in my pocket!
7.) It’s too heavy, I can’t play this for long periods of time without having to give my arms a rest.
8.) It’s so heavy, I can’t play one-handed. This makes jacking sessions during Metroid II impossible.
9.) Mono sound. I know there’s a headphone jack for stereo, but maybe I want to listen to this wonderful chiptune music without them!
10.) 8-bit? Really, trying to pander to the retro crowd yet again, huh, Nintendo? So much for pushing the envelope forward.
11.) Too many gaps that collect dirt. This is my Game Boy. Look at it! You can’t even eat Nacho Cheese Doritos™ without getting cheese dust all up in it. 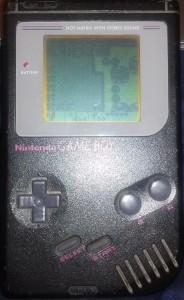 12.) The games are cartridges! CDs were available in 1989, and would have improved sound and graphics dramatically. I don’t care if that would have made the Game Boy bulkier.
13.) It’s too bulky. This was clearly made for someone with gigantic hands.
14.) Terrible LCD screen. Seriously, you can’t play a game without sitting on the surface of the sun.
15.) No first person shooters? Really? Come on, at LEAST get Wolfenstein on there.
16.) Matte finish? Who designed this thing, someone with glaucoma?
17.) The D-Pad digs into my thumb and it hurts.
18.) Where’s Nintendo’s best franchise, Super Smash Bros? That game came out in 1999, and the Game Boy was still around; no excuses for a lack of a port, Nintendo!
19.) Why isn’t it backwards compatible with the NES? I know it uses pretty much the same processor, you could have made an adapter.
20.) My (now-ex) girlfriend hit me in the head with it during an argument, and I now have a concussion.
21.) uhasfddfzsddsdz
22.) The Game Boy made Pokemon popular, which made Pikachu popular. I hate Pikachu.
23.) Where do you plug in the second controller for multiplayer?
24.) How are you supposed to do multiplayer on such a small screen?
25.) As I’ll prove in a later video, Nintendo are fascists. Millions of people supported a fascist company.

In conclusion, the Game Boy never deserved any of the praise it got. I want the $5 I spent on it and the games from my local Goodwill back. If you’ll excuse me, I’m gonna go play a GOOD handheld console: the PS Vita.