“I’m tired of the pandering. That’s all.”

The tension in the room where our interview with 24-year-old Chris Valencia took place was almost suffocating. Valencia made local news headlines by taking blu-ray discs of the Academy Award nominated film, Brokeback Mountain, and placing them in the science fiction book section of the Barnes & Noble near his house. 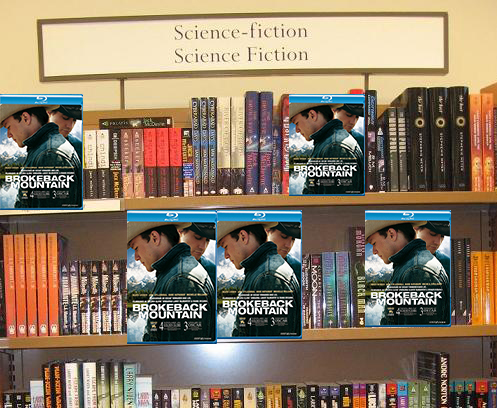 Valencia planned to stop the “SJW revolution” by doing little things that nobody really cares about and getting lots of likes and comments online from people who barely leave the house.

“The way video games are made and played is changing for the worse,” Valencia said. “Developers are trying more and more to be politically correct and all-inclusive, but all that does is glorify the minority while devaluing straight white males.”

Valencia himself is a Hispanic male, so when we asked why he cared about the portrayal of white people, he met us with an interesting answer.

“I don’t care about how white people are represented really, but I don’t want gays, lesbians, transgenders, blacks, latinos, asians, etc., to seem like they’re any better than anyone else. We’re all shitty people. People are shitty. Look at me; look at my shitty moustache and my shitty nipples that protrude from my shirt. Why do you want me to look like I’m something I’m not? I want real realism in games, not this shit written by people who were hired for their skin color or gender or sexual orientation or their liberal pursuits. And you know what? Fuck that, I’m Hispanic; I love beans and tacos and people being gored by bulls with huge cocks. It’s fucking okay to write us like that sometimes. It’s a part of our real, living culture.”

Our last question for Valencia was why he decided Brokeback Mountain had anything to do with the gaming industry.

“It doesn’t really, but it’s fiction, and that’s where it belongs. It’s not real life, so it’s not a big deal. There’s also no video games at Barnes & Nobles, so I had to improvise to make a point. In hindsight, I probably should’ve gone to Gamestop instead, but.”