GameStop has shaken up the used games industry once again by finally rolling out it’s online -only (for now) “Retro Classics” merchandise for people who love old school gaming but hate supporting anything other than big businesses.

The goal of this obviously is to dip their hand into the quickly growing demographic of nostalgia junkies, but you know, there may also be some more personal ulterior motives behind it. Even the CEO of an evil, fear-mongering company like GameStop is just a a person, and all people enjoy a little blast from the past now and then. Perhaps GameStop’s higherups wanted to help a generation of lonely, internet/depression pill addicts take a trip down memory lane to the days before they lost sleep over deciding what gender they were, drawing pictures of cute potatoes and chibi ghosts saying oddly specific things about how it’s okay to not talk to people or be motivated about anything, and how many reblogs it would take to kill all the whites.

Buying the old video games that you grew up with will surely incite some warm and fuzzy feelings, but GameStop is taking this one step further by offering a service that will convince your parents to pretend that they’re still married for a while until your inner child is satisfied.

Is your mom dead?

This new service is called GameStop: Matrimony HD Collection, and it will be launching this November, just in time for the holidays. We talked to GameStop CEO, also person, J. Paul Raines about this next chapter of pandering to little babies who refuse to move on with their lives.

“GameStop’s Retro Classics are here after months of preparation, and despite some negative feedback on Facebook and other things that don’t matter all that much, we’ve done pretty well in the opening stages. Our Research and Development team took a cross country tour of the U.S., comparing price points of certain titles, seeing what was in high demand and what wasn’t, and really helped influence our decisions on how exactly we were going to run the Retro Classics product line…” 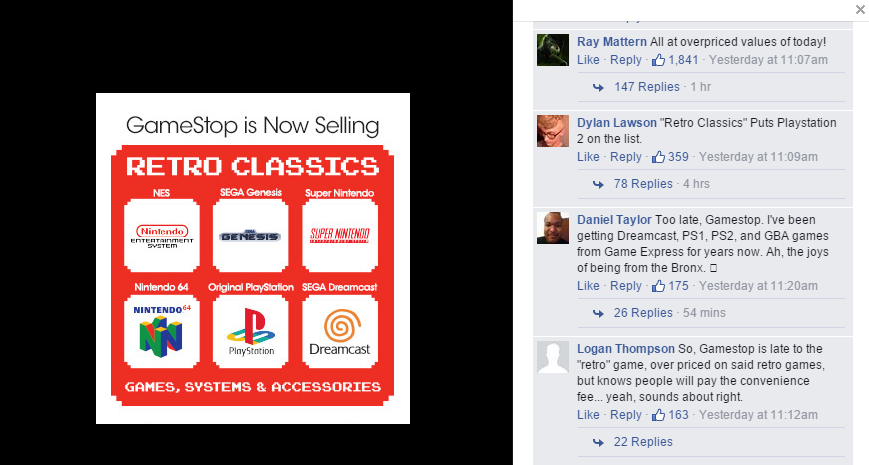 Imagine how happy these guys will be once they find out their parents will love each other again.

“…One thing really bugged me though: GameStop really wouldn’t be standing out too much once we got into the retro biz. We needed to do something above and beyond taking peoples’ precious childhood memories and giving them five dollars in store credit so we could flip it for a two-hundred-plus percent profit. Then, it hit me. Why do people buy old consoles and games when the modern games industry is offering the best games in the medium’s history? It’s not because old games are high quality, because they aren’t, they’re all shit; it’s because people want to go back in time. It’s like watching old movies or cartoons you haven’t seen in years. And what better way to go back in time than having your parents physically in the same house again? We know they hate each other now or are at least passive about each others’ existences, but don’t worry, GameStop can still make it happen.

Gamestop: Matrimony HD Collection will send a hired gunman to each of your parents’ place of residence, and force them both to pretend they like each other for a specific amount of time based on the customer’s choice of time package. We’re still weighing our options on how many time packages to offer, but right now we’re roughly at $100 per three hours. So, you could probably beat an old Mario or Mega Man game if you’re really good for our lowest time package, but if you need more time, it goes without saying that you’ll need to upgrade. We also have ‘real-life DLC’ that you can add onto your package, such as having your parents make you dinner, kiss you goodnight, or fuck loudly in a bedroom while you play your Sega Genesis on the living room TV, just like the good ol’ days.”

Sounds good to us. For updates on GameStop Retro Classics and Gamestop: Matrimony HD Collection, keep it locked on Video Entertainment Analysis Group.