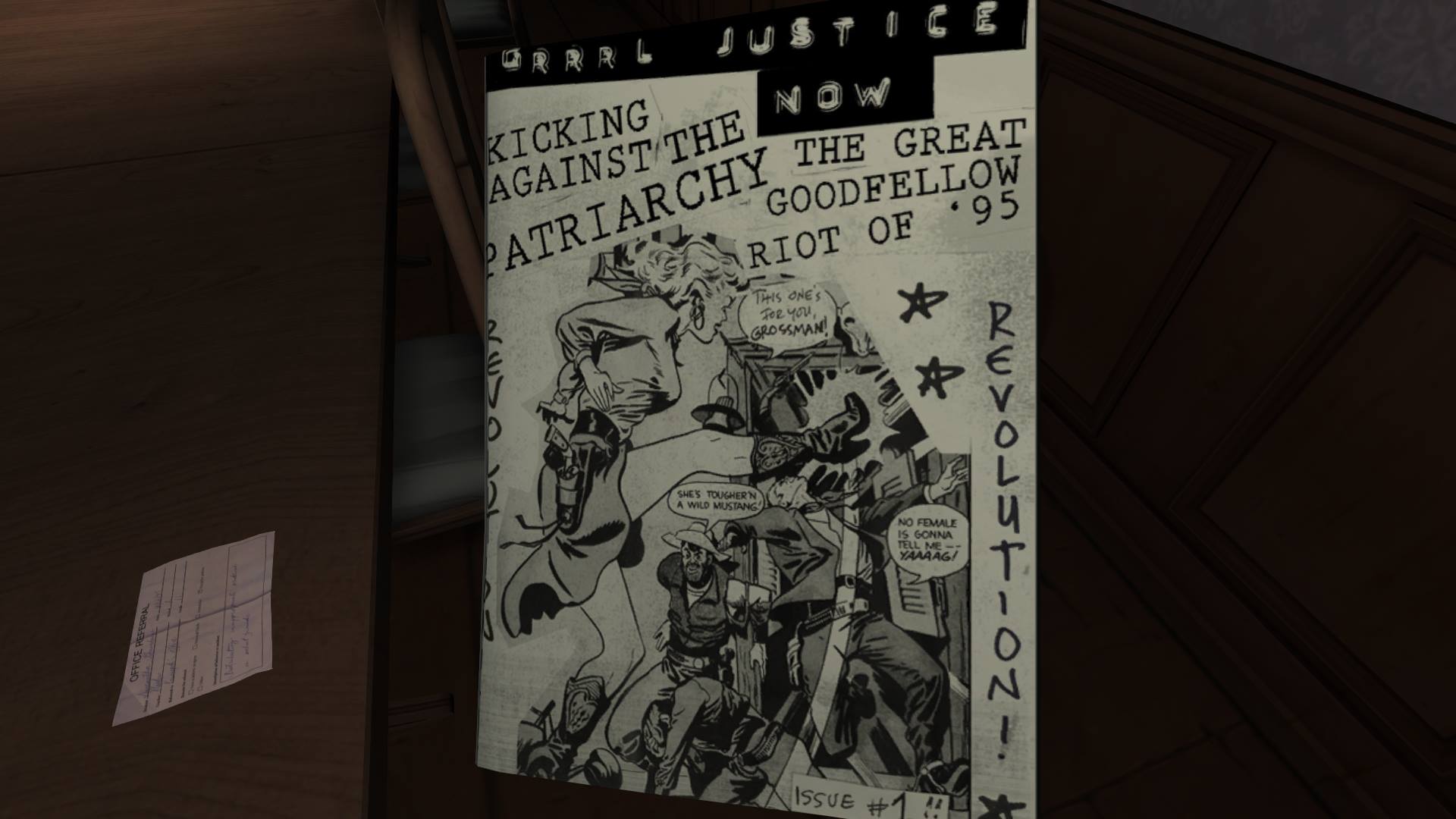 Gone Home will sit alongside other American great stories, such as The Lion King, and The Wizard of Ooze.

The Fullbright Studios game “Gone Home” has garnered a lot of controversy over the past year, with it’s biggest criticism that something that technically isn’t a game shouldn’t win Game of the Year on several websites and publications. But that is exactly something a male with no respect to female culture would say. See, the problem with mainstream video gaming and, by extension, game review websites, is that it’s a male-dominated medium with little-to-no input or experience from the fairer sex. That’s why I’m happy to say that “Gone Home” is the cure for the common game.

You play as Kaitlin Greenbriar, a woman in her early twenties living in the mid-90s, coming home from a tour of Europe. Upon arrival, you find that your parents and your sister are gone, leaving you to explore this spooky house that you moved into recently after your uncle passed away. What’s more, your sister doesn’t want you to know where she is. It’s up to you to explore every nook and cranny of this place, whether that means opening up the hundreds of drawers and doors in the house, or scanning the dozens of bookshelves, or even the spaces underneath every piece of furniture in this place for pieces of evidence to your loved ones’ whereabouts.

While you’re searching every last hole in this large house for clues, Sam gives us some exposition into her life. We learn that she had an ex-boyfriend that she only dated for his video games, and he probably deserved it. We’re also treated to some wonderful fem-punk music found on cassette tapes found around the house, with often grating vocals and sub-par instrumentation, but their feminist lyrics makes them masterpieces worth listening to regardless of how bad the music itself is. But the most important thing we learn is, Kaitlin had a girlfriend, Lonnie, who decided to join the army.

Now this is where all criticism about “Gone Home” becomes irrelevant. The only reason these straight white males are complaining about this game is because it’s a wonderfully told story about two lesbians, and there is no sexualization or objectification of them. It’s actually about love and feminism, and they can’t handle both women and the LGBTQ community being represented in a positive way, so they say it’s not a game. Those who say that the high price of the game doesn’t make it worth it or that it’s just a failed survival horror game that panders to LGBTQ community just to win awards are uncultured contrarian swines, and the non-exploitative relationship between Kaity and Lonnie proves that.

Anyway, I won’t spoil the ending, but let’s just say it’s a happy and responsible one that isn’t selfish to Kaity’s family in any way. And after it was all said and done, I feel changed. I feel like I really connected with this highly original story. I felt what Kaity was feeling. I felt as one with Kaity, as if I was making love to Lonnie my own self, touching my lips to hers, running my hand through her pink hair, and groping her supple breasts through her army uniform! Whether it was spending two hours looking for every last clue in even the most inconvenient places which seemed to be everywhere, or throwing items, such as Bibles and plates around because I lost track of what I was doing, I felt connected with Kaity.

In conclusion, “Gone Home” is, in fact, a game, and one deserving of all the praise it gets. And the fact of the matter is, no matter how cliche the romance itself is, or how monotonous the gameplay is, the only thing that matters is the message it conveys: to find true love in your life, you have to look everywhere for hints to help you find it. And remember: if you want video games to be an accepted art form and not just immature entertainment for kids and man-children then, you need to learn to accept all kinds of games, rather than just the things you find fun.