HOLLIDAYSBURG, PA- “It was starting to take over our whole relationship… She even refused to get dressed when we had company over. It was embarrassing and distasteful for her to be dressed like that around other people. All she ever did was play on that damn Xbox. She then began to send messages over XBL to other men that made me feel uncomfortable…” 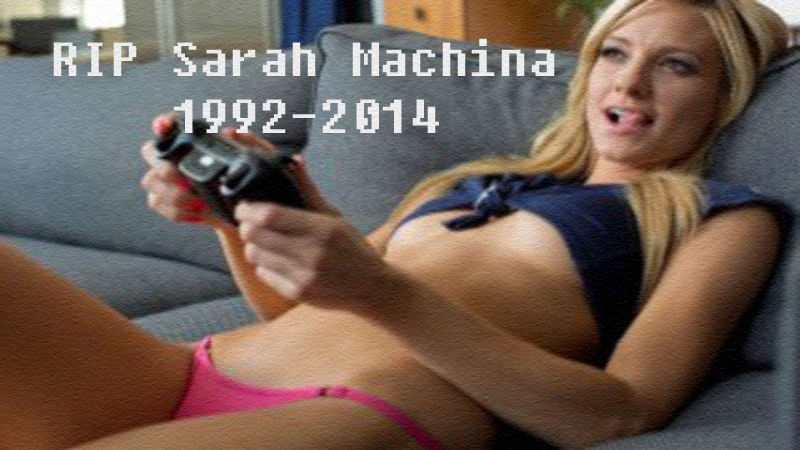 Remember her as the beautiful gamer girl she was.
XBL: SassyCandySlut87

Was the statement we got from Jacob Custer (age 21) after the death of his girlfriend, Sarah Machina. Sarah was found yesterday evening dead in hers and Jacobs’s living room on couch in her underwear with an HDMI cable (torn out of her Xbox 360) around her neck. After being questioned by police Jacob was let go on a lack of evidence. He seemed grieved over the death of his girlfriend, but when asking for a statement he had a strange look in his eyes.

His official alibi given to the police states, “She was busy playing Dark Souls in the living room and I was in our bedroom watching The Big Bang Theory on Netflix on my Macbook. I had my headphones in so I couldn’t hear anything in the other room. When I came out, she was already dead… I have no idea who would have wanted her dead…” The apartment shows no signs of entry, and something seemed off about Jacob’s alibi, but there was nothing to convict him on.

The last thing on the TV screen when the cable was plugged back in was her XBL inbox with a message she was about to send to a user by the name of SaltyBeast61, which read, “ahaa try me ! hmu (;”. The police are unsure whether to call this a murder or suicide, though more investigations need to be taken place, especially to identify the owner of the footprints leading from the bedroom to the living room couch.

Jacob is to appear in court on February 26th after the funeral service to rule out either murder or suicide for Sarah’s death.

What do you think happened? Is he guilty or innocent? Let us know in the comments on what you think the outcome will be.