I’ll be honest, VEAGans. I used to be a Nayonetta.

In the middle of gaming’s previous generation, I kept hearing about this developer called Platinum and their cult classic beat-em-up starring a witch who has clothes made of her own hair or some shit. Sounded dumb, but I checked it out. You know me, I’ll give anything a fair chance. When I Bayonetta into my Xbox, what I got was, well, watch for yourself.

Religious bullshit, overabundant sexuality, and poor writing… – Not my cup of tea, no offense to the Brits. I mean, it’s the first scene of the game and there’s already dude pissing? Usually games wait at least until about the halfway point to introduce urine to the narrative; I just can’t handle pee play within the first hour of a new game. And the guns, oh my god, the guns.

First off, Bayonetta shoots guns attached to her heels? As much as Quentin Tarantino (Yes, I watch movies) would love that concept, it’s just unrealistic. How does she activate the trigger? Why is that never explained in the game?! It makes no sense! Second, why does the bald one have so many guns? He had like, a pile of guns. Were those illegal? Can’t imagine all of those guns being registered. With all the gun control politics going on right now…Imagine your kids playing this game. Just…ugh.

Anyway, I wasn’t a fan of Bayonetta. The ultraviolence and extremely attractive protagonist made me feel like one of those people you see on Humans of New York that get a ton of likes on their photo and people act like they care but they really don’t care and it’s just a positivity circlejerk so those who comment can feel like a good person and have a better day while I don’t.

The gameplay? Oh, it was fine. Would’ve been great, actually, if the story wasn’t about a sexy witch. If I want witches, I’ll just watch Puella Magi Madoka Magica, thanks. VEAG did require me to review the Wii U exclusive sequel, Bayonetta 2, though. Check that out here.

Speaking of Wii U, one of the best games ever is on it, and that game is Super Smash Brothers. Basically, Super Smash Brothers, or “Smash,” as people in the ‘unity like to call it, is a game where Nintendo’s most popular characters fight and throw each other off cliffs. 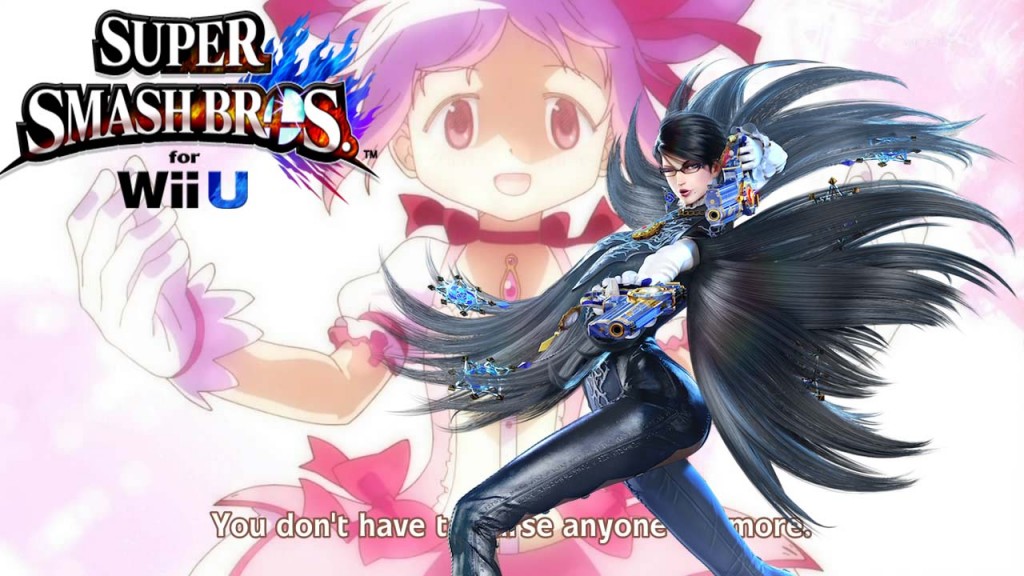 They’re both related to witches and nerd culture, so that’s why I made this pic. Hoping it’ll get people to click on the article and share.

Now, I know what you’re thinking,

“Hey, Josh, don’t you hate violence in video games? Wouldn’t you rather play something like Firewatch or The Stanley Parable? Isn’t your cock really big because you play games like that and find them artistically engaging and review them highly despite them lacking key elements in what makes a game a game?”

Here’s your answer. Yes, I hate violence in video games, except in the Tomb Raider reboot. Yes, I’d rather play narrative-driven First Person Walking games. And yes, my girlfriend does think my penis is above average compared to all the other penises she’s had, and she’s had a lot so she would know. That being said, Smash does violence the right way: by having Nintendo characters in it and being made by Nintendo.

When Smash director Masahiro Sakurai announced that DLC fighters were going to be added to the game, and the ‘unity would be able to vote on who makes it in, I was ecstatic. Finally! I’d get to play as Nintendo favorites like Daisy Ridley, and Geno! Unfortunately, none of those characters were included, instead being thrown under a bus where the only passengers were Fire Emblem characters, characters that are pretty much Fire Emblem characters, and…Bayonetta? 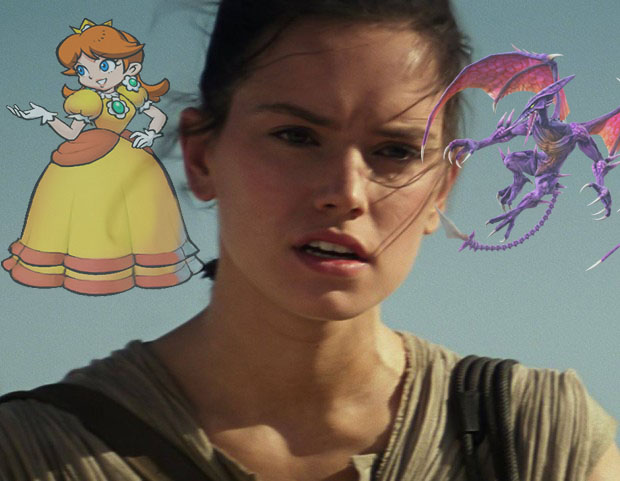 As much as I love Bayonetta now, it’s a shame this character didn’t make the cut.

I was dumbfounded. Bayonetta is from an M-rated game, and there’s never been an M-rated character in Smash before. How would they possibly fit this foul-mouthed, gunslinging whore into my family friendly fighting game? When the Bayonetta introduction video dropped, though, I was pleasantly surprised.

Her unacceptably vulgar language was toned the fuck down. Her toned ass and titties were no longer on full display whenever she uses her “hair” to activate a spell. The blood and humping were gone. Hey, Bayonetta was cool! #Baeonetta, am I right?! Without all the things that stayed true to Platinum’s original vision, Bayonetta was a character I could get behind and accept. In fact, I play as her all the time now in For Glory matches (Witch Time, anyone?). She’s witty, subtly charming and flirtatious; I’d love my daughter to be like her some day. My favorite thing about Bayonetta’s inclusion in Smash Brothers though is the fact that she wears glasses.

When I was younger, I used to be bullied because I wore glasses. The popular kids at school used to wait by my bus stop after class and shank me with pocket knives when I was just trying to go home. Then, they’d sit on my head and defecate, laughing like hyenas, chanting in perfect unison, “Glasses boy! Glasses boy! Ha, ha! Take a closer look at my shit! Your vision is impaired!”

All my life, I’d been wanting to play a video game where you get to fight as someone who wears glasses, just to spite those bullies. I could’ve handled the situation when I was younger, but I didn’t, so I’d rather play a video game to vicariously beat them up decades later. It feels really good and normal to finally be able to fulfill that fantasy.

I judged Bayonetta at first, but once she changed, I think she’s awesome. Bayonetta and Bayonetta 2 are still shit, though.