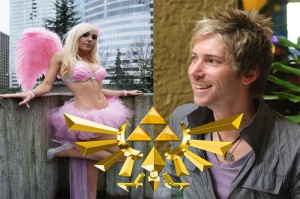 “LIKE” if you think Jessica Nigri looks nice in heels.

BEANTOWN, VA – The Legend of Zelda franchise has always been one of the most influential and critically acclaimed names in all of gaming. How do they do it time after time? It’s one of the world’s biggest secrets, but one thing the series has always done consistently is force us to read a lot, and for this new generation of gamers, that can get a bit aggravating.

Fear not, though, because VEAG got to go one on one with one of the world’s biggest voice actors. Troy Baker, of Brothers in Arms fame, will be the official voice of Link in an upcoming, completely voice-acted Zelda game. He couldn’t go into much detail since Nintendo is a bunch of cheeky sneakies, but here’s what he had to say about being the first man to bring life to a legendary Elven mute.

“When I got the call, I was dumbfounded. Me? To voice LINK? Insane. My manager told me that they originally wanted Kanye West to voice him, but he turned down the role ’cause he was making a music video with his naked girlfriend or something. Oh well, his loss! I’m so blessed to have such great fans and a job that I absolutely love. This, for me, will be a huge milestone in my career. Hopefully I can meet everyone’s expectations, because I’m going to give it everything I’ve got. Working with Jessica Nigri is sure to be a big deal, as well. I swear, if I wasn’t married…”

When we asked about the game’s story, he began to profusely sweat like he had people watching him, waiting to slit his throat if he uttered a single word. It was pretty funny.

Jessica Nigri, who’s usually known to have breasts, has been confirmed to be portraying the regal princess of Hyrule. She was unable to come do an interview with us unfortunately, but Nintendo of America Reggie Fils-Aime sent out a pretty informative tweet that answered all of our questions anyway.

“We chose Nigri bc we saw her on RWBY and it waz the best voice acting ever! Also she’s blond like Zelda so the choice was easy.” – via Twitter

Looks like once again, The Legend of Zelda is going through an important evolution in order to remain on top of the world. We here at Video Entertainment Analysis Group can’t wait to see where this rabbit hole leads us. Also, Jessica, call me. Snapchat?