TOKYO, JP – Metal Gear Solid V: Ground Zeroes and The Phantom Pain. Two sides of the same eyepatch. The most controversial game(s) containing child soldiers, disembowelment, amputee war criminals, and people can only fixate upon how much skin the traumatized mute sniper girl is showing. 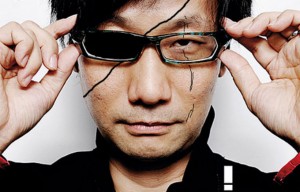 Kojima has always been a man of intrigue and mystery, but today, he explained to us how the game would not only fit into the already confusing and convoluted Metal Gear canon, but also, how it would tie into other games Kojima has made as well.

“You see,” Kojima explains, “I wanted to do something that would unite it all. To do this, I made one of the main plot points that Huey was instrumental in creating Jehuty, after being ambushed by Skull Face and being forced to work with him. After deeming it too powerful, they shoot it up into space, until it is retrieved in ZOE. A year after the events of Metal Gear 1, Lucifer-Alpha is released out into the atmosphere made by the same doctor who gave Big Boss his prosthesis, killing lots of people in the Catastrophe. Young Gillian Seed will also make an appearance.”
“Come on, I need money,” Kojima goaded during the interview. “And I really just want to be done and finished with the Metal Gear. Haven’t my attempts to sabotage the series early on been any indication enough? I make you play as a androgynous crybaby and you still want more for me? Why does no one cosplay as Johnathan Ingram or Random Hajile when I go to cons? It’s just the same old, worn out, gruff cynical pirate man at every con. David Hayter got too old, worn out, gruff and cynical one day. That’s why I fired him for the big action hero on 24 instead.”

After this speech, Kojima stormed out hastily and refused to dwell more on the subject. Mumbling under his breath, we could of swore we heard him saying all of his fans are gullible morons.