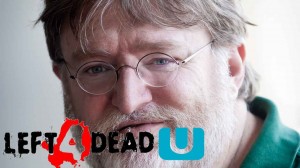 KIRKLAND, WA – It looks like Mr. Newell is up to his old tricks again. Popular survival-horror game Left 4 Dead is finally returning to the forefront of first person shooting with the dangerously anticipated third entry in the franchise. There is quite a twist to this great news, however, because it seems Valve and Nintendo have finally struck a deal together. You heard it here first, folks, Left 4 Dead 3 is a Nintendo Wii U exclusive title set for release mid-2014. Foreign Correspondent Cliff Lerma sat down with the Valve co-founder to discuss just why this decision was made.

“Well, the guys at Nintendo have been asking to work together with us for years now, but we’ve never made any huge strides to make that partnership happen. Then, one night, I thought of a really funny joke. The Wii U is selling pretty badly, right? And now that the more technologically advanced consoles by Sony and Microsoft are out, it’s definitely not gonna help things. Out of the three consoles, Nintendo’s is the one that’s going to be left for dead. Left 4 Dead 3.”

Gabe went on about how Nintendo was desperate enough to accept the joke in exchange for exclusivity, but our interview was soon cut off by screaming mobs of hairy examples of America’s obesity problem outside Valve Corporation’s headquarters. Apparently, legions of PC gamers were annoyed by the fact that they’d have to reduce themselves to console scrub level in order to enjoy one of their most sought after sequels. How did they hear the announcement at the same time we did? VEAG’s security team suspects hidden cameras or microphones.

“Buy a Nintendo console? What do you think I am, open-minded?!” Yells a guy in a My Little Pony shirt as Cliff Lerma desperately runs towards his brand new Prius. Luckily, Cliff was unharmed, but he said he had to shower a few extra times to get rid of the sweat smell.

Newell sent us a message on Tumblr later that day to apologize and expect official updates in the near future. His first update was sent in the very near future, because minutes after, he reblogged our picture of a kitten in a tuxedo and added a very special message.

Well, gamers, it looks like you won’t have to use mods to play as Nintendo characters or explore Nintendo locales anymore within Left 4 Dead. Newell said to prepare to wipe bloody brains off your face in the forests of Hyrule and the sewers of the Mushroom Kingdom sometime in summer 2014. Official Nintendo-themed campaigns are confirmed for the Wii U release.