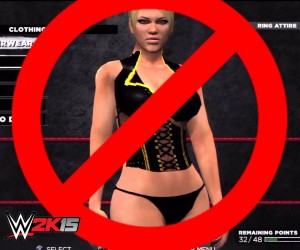 NOVATO, CA – For the past 14 years, the WWE video game series has been the flagship wrestling video game franchise worldwide. Featuring simple controls, a huge list of moves, and an extensive creation suite, the WWE series has sold millions of copies for each of its installments. 2014 will be the first year the console comes to current generation video game consoles, and with the most realistic-looking move animations and wrestlers yet, WWE 2K15‘s release has been highly anticipated by wrestling fans.

All this being said, as with most video game franchises, when a series makes a jump from an older generation of video game consoles to a new one, it’s bound to lose some features, and WWE 2K15 is no different. Amongst the features being cut are the title belt creator, the story creator, custom entrance music, and arena creator. Perhaps the strangest feature being cut of all of them all is the ability to create female wrestlers.

“For WWE 2K15, we were unable to support new versions of Create-an-Arena, Custom Divas, Create-a-Championship and Story Designer. This decision was extremely difficult, but a necessary one, in order to deliver a more focused and polished game.” the 2K Staff mentioned in their article detailing the creative suite.

“In all honesty, we took out this mode for a reason,” WWE 2K15 creative director Bryan Williams said. “This year, in our new creation suite, we’ve allowed players to upload custom graphics and textures for their create-a-superstars. We didn’t want nude textures on Divas. I mean, we’re already gonna have a hard enough time moderating all the penis textures for male wrestlers, we just don’t have time to look for every single vagina and nipple texture as well.”

Many wrestling fans have not been happy about this move. “There’s no excuse for this,” Eddie Miller, online wrestling fan said. “We have the most realistic-looking wrestlers ever in this game, and yet, I can’t make the perfect woman to touch myself to? Well now I don’t want to buy the game!”

“Wow, this sucks,” said James Halford, who has bought every installment of the WWE games franchise for the past five years. “I had this character in the game named Felicia Rose. She was half black cause that’s hot. She had blonde hair, and wore a black bra and boyshorts to the ring, with a big ass and breasts. Her finishing move was to spank, then kiss her opponents. And now, I can’t have a realistic version of her in WWE 2K15?  What the [expletive]?”

“I’m really upset I can’t play as female wrestlers now. Maybe I want to put on 60-minute technical classics with a lady,” said Noah Juan-Ever. “I refuse to buy the game now.”

“We’re aware of the risks,” Bryan Williams said. “Our financial analyst doesn’t expect [WWE 2K15] to sell well. I mean, there are a lot of 13 year olds without internet access that just want to get themselves off. Our target demo is 13 to 19 year-old males. But I have confidence that the realistic gameplay and graphics will more than make up for the lack of female created superstars.”

Pre-orders for the Xbox One and PS4 versions of WWE 2K15 are just short of 100,000, according to GameStop and Best Buy numbers. Perhaps they underestimated how important the feature really was.