GLENDALE, AZ – For decades, the Super Bowl Half-Time Show has captivated American audiences with it’s massive scale and huge star power, not to mention it takes place in the middle of arguably the biggest annual sports event in the world. One might also argue that the Super Bowl is even bigger than the Olympics, and they would be right. You don’t see people getting hyped up for the Doritos commercials in-between luge races, do you? Seriously, do you? I’ve never watched the Olympics, so please fill me in over at the comment section.

Moving on, it’s no secret that internet “celebrities” are slowly but surely starting to break into mainstream media. They’re sneaking into our advertisements, putting their subpar web series’ on Netflix, getting bought out by Disney for billions of dollars, and it’s only going to get worse from here due to their popularity. Many Youtubers are getting more viewership than prime time television shows, and that’s a good or bad thing depending on who you ask. For example, if you ask someone with decent taste and a mature understanding of the entertainment industry, they will say it’s a bad thing. If you ask a ten year old that stays online past their bedtime watching Minecraft videos on their knockoff Android tablet because they can’t use the TV downstairs without getting in trouble, they’ll say it’s a good thing.

For those who refuse to use search engines out of fear that the Illuminati is tracking their internet habits and watching them remotely through webcams (uoy ees ew), the 2015 Super Bowl will be held at the University of Phoenix Stadium in Glendale, Arizona, and rumors indicate that they have a “very surprising, unprecedented” guest in mind to distract the audience as gnomes pickpocket them in the bleachers through the darkness. The special half-time show guest apparently is going to be none other than Markiplier, one of Youtube’s fastest growing Let’s Players. National Football League CEO, Roger Goodell, had this to say about these speculations.

“Well, ya caught us! Indeed, Markiplier will be performing during the half time show. The NFL is dedicated to bringing not only the best of the best in the athletic realm to the Super Bowl games, but also the best of the best in entertainment and pop culture. We want to make each ‘Bowl memorable and extra dank for the fans. We’ve been keeping our eye on what young people are interested in, because old people suck and are irrelevant and never buy anything. It seems to us that the kids love to watch these guys play video games on Youtube, and ‘Let’s Players’ bring in millions of views on their videos as well as a ton of advertising dollars, so putting Markiplier into the mix seemed like a real…touchdown of a marketing decision! I hope watching Let’s Players during the Super Bowl Half-Time Show becomes a new American tradition.” 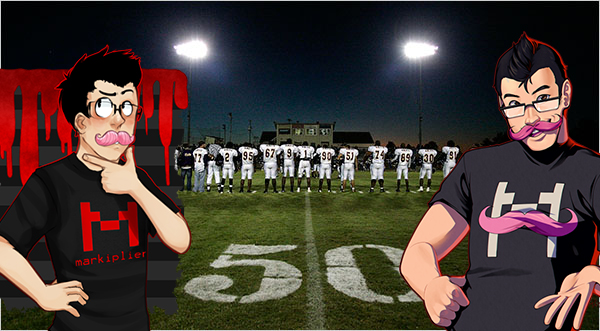 Do you think he’ll do a Let’s Play of the new Madden?

What will a Let’s Player’s half time show be like? That remains to be seen, but we here at Video Entertainment Analysis Group hope that there’s a facecam involved. What do you guys think about this? Be sure to let us know here in the comments and on Facebook. Please let us know. Please. Please comment, we need the activity on our site and social media if we’re ever going to progress.