Needless to say, 2013 was an awful year for games, and this Ninja Theory take on Metal Gear Solid is no exception. First they ruined Bayonetta with their DLC, and then they ruined the Devil May Cry franchise by mixing it with Shadow the Hedgehog on the Gamecube which led to massive camera and control issues in both. Literally no good games came out that year and frankly, I’m furious. 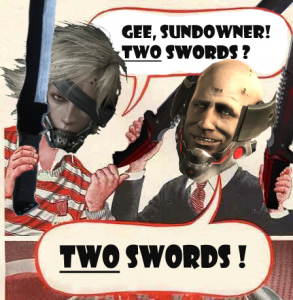 Way to go, Revengeance. Advertise your game with memes.

Either way, I’m not here to rant about last year’s game line-up, I’m here to review the latest Metal Gear Solid game. Revengeance warmed the hearts of crowds at E3 2011 and even I myself had high hopes for it, but as they released more trailers and information on the game my enthusiasm has simmered down to a small flame, and was put out the second I put the controller in my hand. Let’s break down where the original game went wrong before I go over what the sloppy PC port did to make it worse.

Gameplay:
Four-directional controls with no analog control? No camera control? What control does this game have apart from button sensitivity issues? If you’re willing to put up with these it can be playable, but it makes me wish they tested this game before releasing it. Blade Mode is pretty useless with only 4 directions to swing your sword. But the worse part has to be that the game had no conventional blocking system, making you die countless times each level. E3 was undoubtedly all hype.
2/10

Sound:
When they announced Koji Kondo, best known for composing Zack & Wiki: Quest for Barbaros’ Treasure on the SNES, was going to be directing the score for this game, and that Guns N’ Roses was going to be making all new tracks for battle sequences, I think everyone including myself was surprised. I love the music of both Koji Kondo and GNR so I thought the mix-up would be interesting, and I wasn’t exactly wrong on it. The game has a few good tracks, but most of it was obviously composed without much thought process or creativity. Don’t even get me started on the mediocre voice acting either, as they couldn’t afford to get back the original cast. Raiden was forced to be voiced by Vic Mignogna. ‘Nuff said.
6/10

Story:
The Metal Gear franchise has got to have one of the best and most complex storylines in the history of gaming, so I figured Revengeance would live up to it. Yes, that’s right everyone, this game beats the MGS Ac!d games for “worst Metal Gear Solid” story. Poorly written storyline and cheesy dialogue definitely throw more fuel to the fire here, and that fire is burning a hole in Hideo Kojima’s wallet. It won’t be long before they go bankrupt after this blunder.
2/10

Graphics:
While the graphics in this game, at times, are some of the best we saw in the 2013 game lineup, it doesn’t make it off that clean. Gritty shadows, muddy textures, low resolution, low and inconsistent fps, clipping errors in most cutscenes, are all things that plague this game to its cyber-genetic grave. It all goes hand-in-hand with the terribly positioned camera. In one cutscene Raiden’s robotic foot was where the texture for his nose was supposed to be! Don’t ask me how they screwed that one up.
5/10

Overall:
This game is far from impressive, but doesn’t quite make “Worst game of 2013”, as Bioshock Infinite took that spot as soon as it launched. I’ve only played about 15 minutes of the game, but I feel like I’ve already seen and played all there is to do in it. I regret paying full price for this game and I’ll be trading it in along with all the other garbage games 2013’s given me. If you’re a hardcore Metal Gear Solid fan, please pass this up so you don’t ruin the franchise for yourself. Only trust a Metal Gear game from Kojima himself. Save your money for Guns of the Patriots 2 instead.

Not much of a difference from the console version with both being just as unplayable. For the first few hours I couldn’t even launch the game because Games For Windows Live kept asking for a CD key they never gave me. I just gave up and got a code from a keygen for the game just to get it working. I played it for about as long as I did on the console and have roughly the same thoughts on it; but it’s slightly more enjoyable after you mod it so all of the enemies are Clementine and Ben from The Walking Dead (Telltale Games).