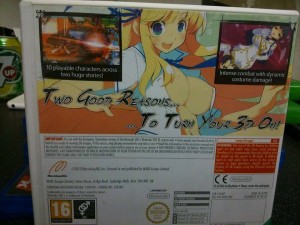 ATTENTION! ATTENTION! WE BRING YOU A SPECIAL VEAG NEWS REPORT!

Senran Kagura. A game emerging from the brewing cauldron of controversy. A game that has offended many, but enticed very view. A game which uses a fun and intelligent way of using the 3DS controls to it’s fullest potential, while offering a unique and satisfying side-scrolling experience, with very cutesy anime style graphics and fun beat em’ up gameplay. There’s just one problem.

The game is sexist.

Now this isn’t just some nudge nudge wink wink sexism going on here. This is some heavy stuff. So heavy, it’s probably being listed on Kotaku right now under a list titled “Top 10 Games Propagating Rape Culture”, but let’s get off that sensitive topic. Let’s talk what we originally planned to talk about, the obvious sexism and portrayal of the weak female archetype in the game. Although these girls are ninjas, and they could probably stand their own in a fight, all of that is rendered null by the rips in their clothing, the gratuitous butt shots that really focus the camera in an angle where you can see her tight little tush up her skirt, the finger-licking good breasts…Um, anyway, we have talked with our finest game critics and a highly articulate member of the VEAG crew, Dr. Rip Bang, M.D.

“The game is blatantly offensive,” says Rip, who has a piece of paper that entails you to learn that he knows more about what he’s talking about more than you ever could, “as you can tell by the exaggerated cleavage, it’s trying to weaken women at their core, not empower them. You know what I’d do with this game? Senran Kagura? See You In The Garbage. And that’s my expert analysis.” There have been more vocal and aggressive stances taken against this game, such as the one lead by the militant coalition Femme Fatales, formed up of staunch feminists. Us here at the VEAG crew, afraid of their already established volatile behavior, sent out a reliable news reporter to ask the group some questions. The reporter’s name is Gabriel Duquette, and we have faith he will get into the heart of what the hufflepuff is about, once and for all.

Mr. Duquette approached the lady with caution as her cabal of followers were preoccupied with tossing molotov cocktails at the windows of the gaming establishment GameStop. Duquette was unnerved by this, and so was the cameraman for a while, but they were ready to die for a great story. He gulped, and stepped forward to meet his gaze with Lady Paula Swiftfists, a belligerent, strong-willed woman. He began to run through his questions.

“So, all this commotion over a video game, huh? I’d have figured you gals would put your time into something productive, like basket weaving.” The joke was lost on Paula, though. “We have come down here to demolish this oppressive establishment! As long as they sell this game, we will have carte blanche to do as we please!”

“You guys won’t be taken seriously. You’ll be looked at as loonies!” Gabriel said, exasperatedly.

“But we already are taken seriously. Across the globe, our revolution has spread. And we will assimilate all that stand in our way.”

Suddenly, one of her assailants threw the cameraman on the floor and retrieved the camera for himself. What we saw was…stomach churning enough to move us to tears, but we will describe it, for the memory of Gabriel to live on.

Two butch lesbians had restrained Gabriel, and Paula approached him with a deathly stare. “You will join us…Everyone will.”

She pulled out her lipstick from under her beret. She smeared it on the chapped, scared lips of Gabriel. After the struggle, we heard Paula utter the words:

“Take him to the Indoctrination Chamber to be castrated. We will make him a woman warrior in our army.”

And then the video cut out.

If anyone has details of the whereabouts of Gabriel Duquette, let us know. He owes me money.