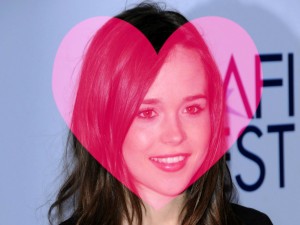 The Canadian beauty in all her HD glory

WHITE TAIL, GA – After rumors of a bizarre love triangle between game studios Naughty Dog, Quantic Dream and Canadian Actress Ellen Page, both studios called a press release denying any crushes or fond feelings they might have toward the young Actress.

All seemed normal until a twitter user under the name of “NotReggie69” posted several tweets claiming the press release was a lie, even one about about both the game studios and the actress in a tree and all three of them K-I-S-S-I-N-G.

Some conspiracy theorists think this may be the title of a new game the three parties are collaborating on, others think its a code for something more sinister, such as the harp transmitter or chemtrails Sony may be using for subliminal marketing.

A tragic romance just in time for valentines day.