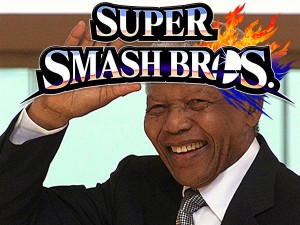 Jungle fever is about to run wild on the Smash universe.

CAPE TOWN, SOUTH AFRICA – The death of inspirational ex-president and prisoner, Nelson Mandela, took all of us by surprise this month. His kind words and actions changed a whole country. He left behind his loving wife, children, peers, and admirers. Amongst those admirers is Masahiro Sakurai, creator and director of the Super Smash Bros. franchise.

Following Mandela’s death, Sakurai was devastated by the grim news, and as many of you know, Nintendo has been working diligently on the new Super Smash Bros. for the WiiU and the 3DS. In honor of Mandela, they have confirmed him to be a playable character in order to immortalize his legacy. Raw in-game footage was leaked, but evidence was once again quickly seized by Nintendo. Foreign correspondent Cliff Lerma reports an unfinished stage with a fully rendered tropical-esque backdrop, which is also where witnesses spotted Mandela in combat stance. VEAG has reached out to Nintendo for statements, but we have not recieved word back. Until then, we will have to wait until E3 for the big reveal. We’re onto you, Sakurai.