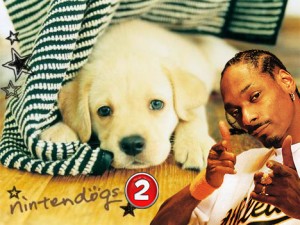 LONG BEACH, CA – The way games are marketed and sold is quickly becoming more and more innovative, with the success of tactics such as product tie-ins and digital distribution making it easier to enjoy and save money on all of our favorite titles. It seems Nintendo has taken notice. Seeing how well the recently released Marshall Mathers LP 2 has sold thanks to a discounted price when purchased with Call of Duty: Ghosts, the Big N has announced their own seemingly unrelated music/game combo.

Snoop Dogg, formerly known as Snoop Lion, is currently working on his final studio album, and plans to team up with Nintendo’s Satoru Iwata to make sure his iconic career goes out with a bang. Pre-orders of Nintendogs 2, the direct sequel to Nintendogs that has been confirmed to not have cats, will also provide early buyers with a code to download the new Snoop album for only $14.99, quite the step down from the usual price of $15. That’s not all however; Players will also get to raise a Snoop Dogg of their own, unlocking on-cartridge DLC featuring a 42-year old man that acts like a dog. Feed, touch, bond, and play fetch with your very own middle aged rapper, only on Nintendo 3DS.

“When [Robert] Rodriguez gave me the call about the Snoop Dogg/Nintendogs 2 combo pack, I told my wife to shut down the computer and drive me to the nearest Dollar General to place my pre-order. The third Machete movie is officially canceled since Rob and I plan to be playing Nintendogs 2 and listening to the newest Snoop joint for the next year or two,”

Says Danny Trejo, popular prison boxer. He just happened to be at the Starbucks where I was writing this article and I asked him about it. We went halfsies on a lemon cake. Really sweet man.

AC/DC’s We Are Still Alive And Making Music  with a currently untitled Final Fantasy  reboot.