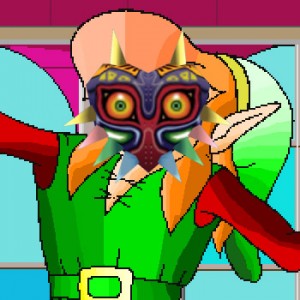 No amount of Song of Time replays will take back how hard you were TROLLED! hahahahah!

KYOTO, JAPAN – Nintendo President Satoru Iwata mentioned that in the latest game in the Zelda Franchise, “The Legend of Zelda: A Link Between Worlds,” there would be a hint as to where the series would go in the future. Though online fans have speculated from the titular mask in Link’s home that Majora’s Mask would soon be getting a remake, this is not the case. In a press preview of this month’s Nintendo Direct, we’ve learned that two more obscure games that were previously not considered canon in the Zelda timeline will instead be remade as part of the popular 3D Classics line for the Nintendo 3DS.

The two spin-off games of the Zelda franchise, “Link: The Faces of Evil” and “Zelda: Wand of Gamelon,” originally released on the failed Philips CD-i console in 1993, will be released as a bundle for the low price of $5.99. As it is part of the 3D Classics series, the entire game, as well as all cutscenes, shall be rendered in 3D. In addition, button mapping has been improved; opening the game menu or using an item no longer requires crouching, and jumping is assigned to its own button instead of pressing up on the directional pad. Sections that require the lantern have also been removed.

“Because of the popularity of the CD-i games on YouTube, and internet memes in general becoming part of everyday culture, we could not deny the relevance of these two games,” Sataru Iwata said. Though there are some glaring problems in the original releases, we’ve ironed out all gameplay flaws while retaining the campy charm that’s made the games famous to begin with. We hope you enjoy these improved games, and we really hope you’ll stop vexing us with questions about a Majora’s Mask remake, because that’s not going to happen.”

Puzzled about his thought process going into these remakes, our foreign correspondant Cliff Lerma sat down with Satoru Iwata himself for a brief interview. “As I’ve said, popular culture is becoming more and more influenced by internet memes,” Iwata explained. “We at Nintendo are working hard to produce more games with this in mind, such as ‘Ninten-Doge,’ ‘What Does the Star-Fox Say?,’ and ‘Came In Like A Wrecking Crew.’ Really, I don’t see how no one caught this. We even made an ‘Over 9000’ reference in Pokemon X and Y.”

Lerma then brought up the fact that Iwata mentioned that there would be a hint about the next Zelda game in “A Link Between Worlds.” “That was just a ruse,” he said. “We put Majora’s Mask in to distract all the people on the internet that wouldn’t leave us alone about it. We get over a thousand emails a day that bug us with the same question: ‘Are you ever going to remake Majora’s Mask?’ Quite frankly, all of us are tired of it. I can’t wait to see everyone’s reactions when we announce the CD-i games instead!”

News of the CD-i remakes has already leaked to a few outlets, and needless to say, there is already backlash. “WHY DON’T THOSE [explitive] [explitive] RELEASE MAJORA’S [explitive] MASK ALREADY?” Kotaku forums user RainbowTwilight69 said. YouTube user TrilbytheFurLover had this to say: “If Nintendo doesn’t release Majora’s Mask this year, I will personally fly to Japan and kill Shigeru Miyamoto. We are ENTITLED to this game, not those [explitive] CD-i games and their awful cutscenes THUMBS UP IF YOU AGREE.” This comment has 105 thumbs up.

It’s obvious that Nintendo’s intelligent and respectful fans want what they feel they deserve. For the time being, however, they must learn that peace is what all true gamers strive for.