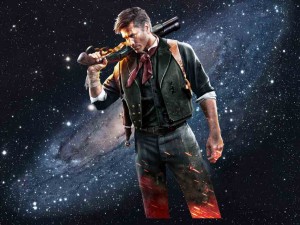 “Booker, are you afraid of God?”
“No, but I’m afraid of being suffocated to death alone in the depths of space or being instantaneously incinerated by a blazing sun.”

BOSTON, MA – Foreign cosplayers becoming official faces on a whim, Game of the Year Awards, Lifetime Achievements, critical acclaim from top industry review sites…Yes, it seems the Bioshock franchise has certainly left it’s mark on the gaming world, and earned one Ken Levine a sizable array of accolades. Intellectual gamers from around the globe agree that the series deserves respect, at least in terms of storytelling, with it’s focus on atmospheric immersion and mind-blowing plot twists. However, it appears that our favorite Ayn Rand-inspired first person shooter may be leaving the gaming world in favor of the gaming universe.

According to an anonymous tip from an even more anonymous Irrational Games employee, (We promise we won’t tell, your job is safe with us. But everyone has a price. So…) the next entry in the Bioshock franchise will make you feel more like Sandra Bullock than any game has before. Though the story is still tightly under wraps, and most likely unfinished, it is confirmed that the game will primarily have the player “engaging in deep space nine combat.”

“There’s a pattern to these games, you see. First, we started at the bottom of the ocean, ya know, the depths of the earth, and then in the second game, you’re up in the sky, right? The peak height of the earth. Then you got our new game. We started from the bottom, and now we’re here, in space.”

When asked about Bioshock 2 actually being the second game in the series, the Irrational representative began to sweat profusely and mutter what sounded a bit like a prayer, so I decided not to press it.

Also, due to the popularity of Elizabeth’s role as a partner/co-star in Bioshock Infinite, there is rumored to be a dog character to assist the player in his or her intergalactic adventure, à la Riley from Call of Duty: Ghosts. It seems Irrational is playing a card similar to the early promotional days of Infinite, where they went around to college dorms looking for smart people who wanted to play smart video games instead of looking at a library or a Barnes and Noble or something. The end result was Infinite‘s main cover art looking like the game was about a gun wielding Michael Jackson impersonator, and it probably did little to no good in helping sales.

VEAG approached Ken Levine for comment, but he told us to “quit fucking stalking me,” and threatened to call the cops. Personally, if I can go off the “journalist professionalism” thing for a second…