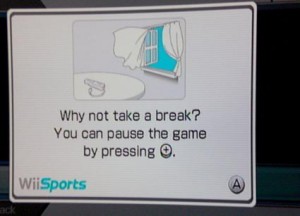 Expect to see more of these in the future. And expect to have better health, too. Fatass. Why don’t you use that 30 minutes to take a brisk jog, huh? Brew a pot of tea instead of chugging soda? Call your dying mother, tell her you actually do kinda care? You make me sick.

KYOTO, JAPAN – On the day of the release of ‘The Legend of Zelda: A Link Between Worlds’ for the 3DS and ‘Super Mario 3D World’ on the Wii-U, two games that have been noted to frequently stress relaxing after long periods of play, Nintendo announced a new regulation for all of its first and second party games.

Effective March 2014, the new fiscal year, all Nintendo-published games will enforce a mandatory breaking period that saves current progress and exits the game every thirty minutes. This period cannot be overridden in any way, and will only cease after the system’s internal clock has counted thirty minutes of inactivity. The timer will reset if the system clock has been changed, restarting the break period for another thirty minutes.

“We feel that this break will give our customers time to unwind and relax between gaming sessions,” Satoru Iwata, President of Nintendo, said in the press preview of December’s Nintendo Direct. “For the past seven years, since the release of the Wii, we’ve tried to encourage players to take a break by displaying a message every thirty minutes in many of our most popular games. However, our words have gone unnoticed, and we will not be responsible for eye strain or fatigue. This is why we will be enforcing this mandatory time for relaxation. We hope you enjoy your break time.”

Foreign correspondent Cliff Lerma sat down with the President of Nintendo Of America, Reggie Fils-Aime, for his thoughts on the enforced break system. “There’s been plenty of controversy on the issue,” Fils-Aime admitted. “The biggest reaction was that [our customers] play these game for the purpose of relaxing, and that the break is redundant in that sense. My response? How can you go on an epic quest if your body isn’t ready? That’s why we’re doing this. We don’t want to lose any of our loyal fans and customers over fatigue.”

Needless to say, many longtime customers and fans are outraged at the notion of an enforced breaking period. Though sales of the Wii-U and 3DS have recently skyrocketed due to the upcoming season, the numbers are expected to decline after this announcement. That being said, a system that doesn’t work every half hour is better than two systems that don’t work at all.