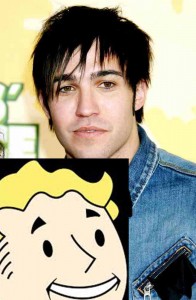 Fallout’s getting a darkwave remix thanks to a little help.

BOSTON, MA – It’s amazing the kind of gigs you can land when there’s puns to be made. Bethesda Studios announced on their Xanga page this week that Chicago’s original Fallout boy, Pete Wentz, will be lending his slender hand to assist the in-house group of musicians on the creation of Fallout 4’s score.

“When we were writing the original melodies for the new Fallout, the team and I felt that something was missing, there was no heart in it,” says Inon Zur, composer of the Fallout series since Tactics on the PC. “That’s when we realized, the tunes were just missing that grungy, raw bass sound. Something only the world’s best bass player could provide. The next day, I was on the phone with Peter Motherfucking Wentz.”

Wentz has also dabbled in electronic music as well, with his failed side project, Black Cards. That may just come in handy, considering the Fallout franchise has always had an emphasis on ambient, artificial sound to create a spooky atmosphere. VEAG was fortunate enough to land a Skype call with the heavy metal rocker, and asked to hear his side of the story.

“All the guys in Fall Out Boy are huge gamers, so this is a big deal for me. They kinda wished they could be involved too, but Bethesda said they only needed bass and some lyrics. I feel kinda douchey, but this opportunity’s too dope to pass up. I mean, we’ve all sunk so many hours into Super Zelda and stuff, being able to write music for a video game is like a dream come true. The fact that it’s a Fallout game on top of that….it’s awesome. Because our names are similar.”

To wrap up the interview, we asked Pete if he could give us a feel for what lyrical themes within the game would touch upon.

He sent us a file called coldheartburningdesire.doc and we opened it up to find what appears to be an already completed set of song lyrics.

All alone with the desperation of others, then the violence starts

But I’m still in love with you

Passion’s like a nuclear bomb, burns your face away

Let’s cry together for fun, alone together in Vault 101

But beauty on the inside is better than having none

After that the file abruptly ends, with a photograph of what appears to be Pete holding his genitalia. I suppose that was his way of preventing spoilers. Or maybe it’s part of the song, I honestly don’t know or give a damn anymore. I could be looking at flat chested anime girls instead of this shit. Fallout 4 will be released at some point in our lives, most likely for Xbox One and Playstation 4. Oh, you wanted a Wii U port? LOL!