It’s all you’ve most likely been hearing about in the gaming world for the past couple days, the fate of the ninth installment in the Silent Hill series, Silent Hills. The collaborative efforts of Hideo Kojima and the film director Guillermo del Toro were highly anticipated, and many of you were greatly saddened the other day when the official word of cancellation hit the net.

Today the PT for Silent Hills was removed from the Playstation Store and is no longer available for download since the game got axed. The excitement to play as Norman Reedus in the highly anticipated game was at an all time high when the news came and this made the fall so much harder. As we’re sure you are all aware by now, Hideo Kojima is leaving Konami, and since Silent Hill has been in Konami’s hands since the beginning, that means one of the directors is already off the development team. Guillermo del Toro has also chosen to leave the project. No Kojima, no Fox Engine, no Reedus, and worst of all, no game to follow. This is truly the most catastrophic event to happen in recent news.

That is where we bring you the good news, straight from Konami themselves. We got the heads up before Kotaku, before Polygon, and yes, before the rest of the net. Silent Hills lives! As it would appear from what we were told, the reason the game was cancelled was because they could not longer get Norman Reedus as the lead because he has gone off to star in The Walking Dead: Survival Instinct 2, which is being currently developed for the Wii, PS2, Xbox (because they believed the reason for the flop of the first game was due to the new hardware). Norman Reedus was unavailable for comment.

How does this bring back Silent Hills? Well, as it turns out, Konami’s new president, Tomohiro Uesugi, has chosen a new lead for the game. The game will now have you playing as Game of Thrones own Peter Dinklage. We managed to get a statement from Mr Uesugi, but a lot of details regarding the changes are not yet clear. 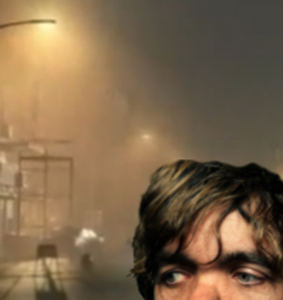 A concept screen from the new PT in development.

“We believe now that Kojima and Guillermo del Toro are off of the team, this gives us many opportunities to make Silent Hills better than it would have been had they stayed. As much as I enjoy Norman Reedus, he is no where near the level that Peter Dinklage is on. This being said, the camera angle will need to be adjusted to be closer to the ground so the player can really feel that they are playing as Peter Dinklage. This will offer many more scares, as you are more vulnerable and more likely to feel fear at such an angle. Once we have adjusted the camera angle and the ending to the Silent Hills PT we will have it back up on the Playstation Store for download, so please do not worry. We at Konami thank you for your patience.”