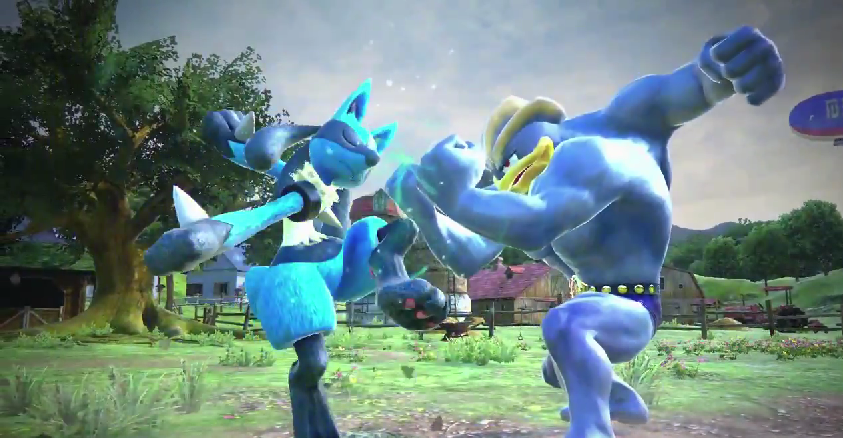 KYOTO, JAPAN – This morning’s announcement of the next Nintendo/Bandai-Namco collaboration was quite the surprise for Pokemon fans, revealing a Japan-only arcade title that we probably won’t be able to play in the States for a good two to five years, if ever. The game is POKKÉN TOURNAMENT, and if you’re wondering what a “Pokken” is, here, let us explain it to you.

You see, Nintendo created this game back when you were still just a twinkle in your dad’s adoption counselor’s eye called Pokemon, and then there’s this other fighting game by Namco called Tekken, so when you put those two together, you have another word that makes absolutely no sense. That’s a Pokken.

Anyway, this morning’s reveal showed the very underrated Lucario fighting a Machamp in real time with HD graphics and a fast paced new style of gameplay. Don’t be fooled though, in an exclusive interview with Video Entertainment Analysis Group, Nintendo of America COO Reggie Fils-Aime says that the game will not stray too far from the original Pokemon formula.

POKKÉN TOURNAMENT does look like a fresh new fighting game, doesn’t it? It is, but there’s still a twist. It wouldn’t be a Nintendo game without one. While it looks like these Pokemon are fighting each other like something out of an action movie, they’re still being controlled by trainers and only have four attacks. Don’t worry about memorizing pages and pages of input combinations to pull off moves, just press A and tell your Pokemon to do the move on it’s own! Many popular fighting games of this era have similar features to this, we just took it to the next level. Now, in POKKÉN TOURNAMENT, something used to help beginner players is literally the only way to play the game. And each trainer can only use one move at a time, it’s still pretty much turn based. We also drew a lot of inspiration from Final Fantasy XIII’s battle system in the fact that it’s pleasing to the eye with the fluid motion of your characters, but you aren’t really doing much. Why are you asking me anyway, Josh? You’re not even going to see this game until you’re thirty-nine.”

We haven’t known about POKKÉN TOURNAMENT for long, but it probably has what it takes to be a smash hit, at least in Japan. I don’t know…maybe. I guess you could be excited about it if you want to. Maybe if you’re a big Pokemon fan or something. At least it doesn’t have an anime art style, thank God for that. I’m so tired of that shit.

For all the latest news on POKKÉN TOURNAMENT, stay tuned to Video Entertainment Analysis Group.