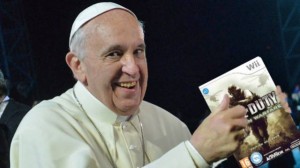 He got my mom’s nudes last night. She told me.

WEST NEWBURY, MA – You read that right, so no need to read it a second time. 2013’s Person of the Year actually is in love with the new Call of Duty game. This proves even more than he’s “just the average person” we see him as; a real man for the people. Just because he essentially runs an entire religion, doesn’t mean he doesn’t have time to kick back, pop in Call of Duty, and mow down some scrubs. For a guy who just turned 77, who would have guessed him to be a hardcore gamer?

While it’s unknown what his gamertag is, or if he even uses voice chat in-game, one thing’s for certain though, and that is that your own Pope kicks ASS online. The pictures shown here are clear proof of this fact. We were able to contact him recently and hit up an interview over Skype. Yeah, who knew he had Skype too! We were able to ask him about his life, and how video games “play” into it.

VEAG: So, I’m sure it comes as a shock to a lot of people that someone like the Pope is a hardcore gamer who loves Call of Duty. Do you think that even that may be a bit out of place? No offense.

Pope: None taken. Not many people would expect someone in my position to even know the first thing about a video game, let alone Call of Duty.

VEAG: Was Call of Duty the first game you got into? That didn’t come out until around 2004 if I recall correctly.

Pope: Of course not! *laughs heartily* While I was already in my late 60’s by the time the first Call of Duty was released, it was by no means my first experience with a video game. The first shooter I played was Wolfenstein 3D and shortly after that I played DOOM. Though I am a bit guilty to say I enjoyed the later released Duke Nukem 3D more than DOOM.

VEAG: Those were on the PC, but now your favorite gaming platform is Xbox 360? I heard you had accounts on Steam, Origin, and PSN. Is that correct?

Pope: *breaks into a fit of laughter* Origin? I hope you’re joking. I do indeed have Steam and PSN though. About the Xbox, I just found the controller to be more comfortable and the online community was very friendly compared to PC and PS3 online. I suppose that is why it’s my console of choice.

VEAG: Apart from Call of Duty, what other kinds of games do you like; anything single player?

Pope: While I spent a lot of time gunning down terrible players online, I do enjoy offline games too from time to time. I just beat No More Heroes 2 a few weeks ago; it was good to finally blow the dust off my Wii. *chuckles*

VEAG: Oh my! Your taste is certainly well placed then. I’m a big fan of the No More Heroes series myself. What did you think of the new Call of Duty and what are your feelings for the series over the years?

Pope: Thank you. *bares a warm grin* The years have certainly changed a lot of things, but my love of video games has remained, and for that I am thankful to God for allowing me to stay here for as long as I have. On the new Call of Duty, I prayed my hardest for Ghosts to be better than Black Ops 2, but God doesn’t always do what you want, as he works in mysterious ways. It has been my favorite franchise since it first released with many coming close to topping it, but only God is greater, of course.

VEAG: That’s a really heartfelt way of putting it, thank you for sharing that with us. Now, on a different note, does the Pope have any more secrets to share apart from being a gamer?

Pope: *leans in to whisper* Don’t take this the wrong way, but I think one of the best perks of my position is never having to pay for my own video games, as people always seem to buy me stuff I have on my Amazon wishlist or on Steam. *sits up and blesses himself* Forgive me Father for thinking in such a way. *speaking to God*

VEAG: I’m sure God doesn’t mind you liking the perks. You’re a normal and humble man like anyone else, and that’s what makes people love you so much. Anyway, we don’t want to take up too much more of your time. It’s been an incredible honor speaking to you like this and we having nothing but gratitude for you.

Pope: Thank you, my child. Your kind words have touched my heart. But alas, you are right; I have to go do some Pope stuff shortly. I wish you the best of luck and give VEAG the Lord’s blessing. I will certainly be promoting you at the next gathering! Right after I finish this match that is…

After that he just zoned out with his 80-inch SHARP HDTV and cussed at the game every now and again. We honestly believe he forgot he was on Skype with us, so we had to end the call eventually to get back to writing.

So who could have guessed? I’m sure everyone reading is just as surprised as we were. Let us know what you think about this in the comments and let us know your thoughts on any other famous figures that might actually be hardcore gamers. There is a gamer in all of us it seems. Ciao!