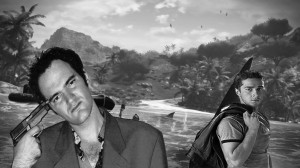 HOLLYWOOD, CA – It seems Uwe Boll won’t be having his grubby mitts on another video-game based movie. Quentin Tarantino, legendary director of such classics as Reservoir Dogs, the perennial Pulp Fiction, and My Best Friend’s Birthday, has greenlit and bought the rights for a movie to be made about Far Cry 3. Set in Rook Island, the movie will be about a botched skydiving trip that sets Jason Brody and friends in the iron sights of pirates, including the menacing Vaas Montenegro. Vaas plans to extort money from the hostage situation, and sell the gang into slavery. Jason must survive on the island and rescue his acquaintances.

“I’ve taken comedic actors and made them stern and serious before,” says Tarantino. “Take for instance, John Travolta in Pulp Fiction. Before that, he starred in Grease and Saturday Night Fever. But after Pulp, he started to tackle more serious, real roles. I’m convinced I can mold Shia Labeouf from a happy, idyllic boy into a full-grown man living off the wilderness.”

Playing other cast members will be Bradley Cooper as Keith, Michael Mondo as Vaas, Hugh Jackman as Buck, and Sharlto Copley as Hoyt. More details will be given as soon as we receive them.