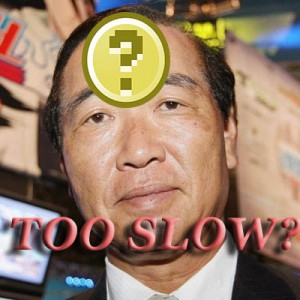 You can only pawn those Chaos Emeralds for so long.

TOKYO, JAPAN – This past weekend was the 20th Anniversary of legendary platforming game Sonic The Hedgehog 2 for the Sega Genesis/Mega Drive. To celebrate, Sega CEO and Chairman Hajime Satomi walked to the company warehouse to retrieve a bottle of vintage bordeaux wine from the year 1992: something of a tradition that Sega has done with every Sonic game since the first. Satomi-sama had a little trouble finding the box it was stored in. Not one to break tradition, he walked further into the back of the warehouse. Not only did he find the wine, but he was shocked to find an entire rack of video games from the Mega Drive, Saturn, and Dreamcast eras produced by Sega that weren’t Sonic games.

“I was stunned,” Hajime Satomi said on his online blog. “None of my other colleagues even knew what these games were. Panzer Dragoon, Shinobi, Kid Chameleon, Jet Set Radio… were these relics from another time? Did we even make these? I thought we only did the Sonic series and Hatsune Miku.. Honestly, I didn’t even know what House of the Dead, Yakuza, or Daytona USA were until John Cheng [CEO] of our American branch brought them up to me. Maybe it was destiny. Maybe we should start revisiting some of these old franchises once again.”

“I for one hope he brings back some of these old titles,” Takashi Iizuka, head developer of Sonic Team, said in an email interview we conducted with him. “Ever since 2003 with Sonic Heroes, our work load has been over-the-top. I’d like a break, to be honest. I know Sonic is our biggest seller, and the company’s mascot, but when you have a Chairman that isn’t aware of his company’s own intellectual properties and thinks that Sonic is the only franchise we have, then it puts a lot more pressure on us. When I found out that he didn’t even know about my pride-and-joy, the NiGHTS series, I was a little peeved. It’s ignorance like this that has caused recent Sonic games to be subpar, because we have very little breathing room between games!”

We contacted Hajime Satomi about his plans for the future of Sega. We asked if he was going to put a bigger focus on some of the other Sega franchises. “Are you kidding? I just got the sales reports for Sonic Lost World. We sold big time! If anything, I want more Sonic! To hell with the other franchises, they can rot in the back of our warehouse for all I care. I’m calling Iizuka-san to get to work on a sequel!”

“He wants a Sonic game? He’s got it,” Takashi Iizuka said in an unexpected email to VEAG. “Twenty years of frustration are going into this game. I simply call it… Sonic, and it’s going to change the way Sega and our customers look at the franchise forever.” Iizuka wouldn’t disclose that many details about the game, but mentioned something about killing off every character that isn’t Tails, Knuckles, or Robotnik. Only time will tell what will become of Sega’s other franchise after this development.