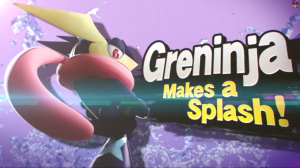 OH, NOT WHAT YOU WERE EXPECTING, HUH?

TOKYO, JAPAN – Today was a very important day for many gamers, as the timetable for the upcoming Super Smash Bros. games on the Wii U and Nintendo 3DS were announced. Of course, the big deal, what most gamers were looking forward to, were some character revelations. And while they saw returning favorites like Zero Suit Samus and Sheik, there was one character in particular no one saw coming: Greninja. While it’s addition is welcomed, how it entered was quite controversial.

In a top secret interview our foreign correspondent Cliff Lerma conducted today at Namco-Bandai headquarters, head developer Masahiro Sakurai explains why Greninja entered the fray the way he did. “Well, on the first of this month, I had forgotten to do my April Fools prank. I was going to paste a picture of Cloud [from Final Fantasy 7] on the front page of the website, then redirect it to Jigglypuff’s profile. Sadly, I forgot all about it, and I just posted another picture. After I realized that I had forgotten, I had an even BETTER idea for an April Fool’s prank! It would take some time, but in the end, it was all worth it.”

“Video game fans are entitled, and if they don’t get every last little thing they want with every detail in immaculate order, they get, quite frankly, very bitchy,”

Sakurai explained when asked about his thought process. “I know who they want in the game, but I can’t tell you if they’ll get it or not. Instead, I’ll tell you what everyone saw. Greninja was introduced to the game by charging up his Water Shiriken attack in a similar way ‘you know who’ does a Shadow Ball. Adding to the effect, their ball-like fingers look very similar. On top of that, when the viewers saw Pokeballs fly onto the battlefield [in the Nintendo Direct video], they THOUGHT they knew what was coming, and that got them all excited, only to be shot down. It’s the best April Fools prank I’ve ever witnessed.”

Before the interview came to a close, Sakurai had this to add: “That, of course, was the main course of the meal. But the bread and salad of the whole deal was when we revealed Waluigi to be an Assist Trophy once again, complete with the plush on my desk to taunt the fans, and when the shadow of Ridley flew over the Norfair stage. HAHAHA THEY’RE NOT PLAYABLE EITHER! APRIL FOOLS, I’M GUARANTEED YOUR MONEY ANYWAY! AHAHAHAHAHA!”

After the interview concluded, our foreign correspondent Cliff Lerma was arrested on assault and battery charges against Mr. Sakurai. VEAG co-founder Josh is in the process of bailing him out. We wish Mr. Sakurai a speedy recovery. Well, okay, I don’t, fuck him I wanted Mewtwo.