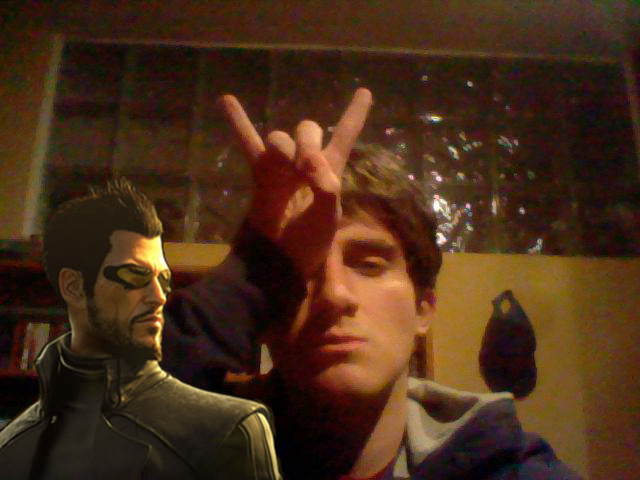 The last photo taken of Mark Johansen before his tragic accident. Well, it wasn’t really an accident.

TORONTO, CA – The screams of a distressed mother could be heard all over a large apartment block in the old municipality of North York. The rest of the apartment block residents immediately rushed towards the scene to see what was going on. The sight was sickening. They found the mother holding her son, who was in a pool of blood. In his right hand was an old rusty kitchen knife, in his amputated left hand a Wii U controller. His TV screen indicated that he was playing Eidos Montreal’s hit game Deus Ex: Human Revolution (Director’s Cut). Thankfully, one of the people which arrived at the scene called an ambulance and the teen was taken to a nearby hospital. The doctors fought with time in order to keep him alive and succeeded. But there was one problem; they could not reattach his arm. One month has passed since this incident. Mark Johansen, 13, the young teen involved in this act of self-mutilation is on his way to recovery. VEAG has managed to secure an exclusive short interview with the teen about his intentions.

“I was bullied all my life. I could have used the power to punch all of my bullies into a coma and get a cool pair of shades for free. I heard from Deus Ex that people were amputating themselves in order to get augmentations so I just said to myself ‘Why not?’ and just like that, I got a knife from the kitchen and cut my arm off,” said the young man, unaware that Deus Ex is a work of fiction and that it supposedly takes place 13 years in the future.When asked if he found his new, plastic arm prosthesis good enough, he answered, trying to imitate the voice of Elias Toufexis as much as possible, “I never asked for this.”

I tried asking him a few more questions, but he just sat there staring my face for about five minutes and then pressured me to go away, saying I was an Omega. Continuing to provoke him proved pointless so I just asked him one simple final question. “Have you played the original Deus Ex?” He just looked at me with a puzzled expression and said, “Human Revolution isn’t the only one?” Disgusted, I turned away and left his room.

Since I didn’t get enough info on the matter, I tried talking to his mother about the incident. Helena Johansen, 45, after slamming her hand on a table muttered, “I don’t know what to hate… those assholes from Quebec or video games, but everyone hates the former so I guess it’s the second one.” The rest was just a sixty minute rant about banning video games.

Walking out of the house, I realized one very important thing about this world… Canada’s health care sucks.