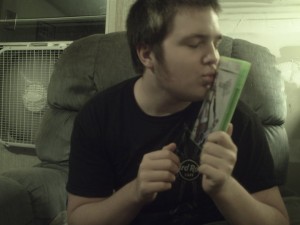 SACRAMENTO, CA – Randy Pumpo, age 18, has had a strange experience that he decided to share with VEAG today.

“Back when I was sixteen, all I ever wanted to do is swap spit with a hot chick, ya know?”

Yes, Randy, we know all about that. We here at Video Entertainment Analysis Group get to snog the hogs pretty much everyday. What we don’t know about is what happens next in the youth’s tale.

“I had recently played Final Fantasy 13, or as I like to call it, Final Hallway 13-Hours-Before-You-Actually-Do-Anything. But even though the game took forever to really get going, I kept getting strange feelings in my gut when I played it. It was kinda like the butterflies you get when you see a really cute girl bending over in a short skirt from across the street and you can tell she’s wearing a thong – like when you’re looking in her window using that telescope your uncle gave you. And not a gross thong either, one of those weed thongs from Spencer’s. Dank ass with dank grass!” The teen laughs.

Randy says soon after, on one fateful afternoon, he had gone to the lake to reflect on how hard taking standard classes in high school was as he usually did, when he noticed something strange. Somehow, Final Fantasy 13 was sticking out of his unzipped backpack.

Curious, Pumpo took out the game, and felt his heartbeat begin to quicken. His cheeks flushed a light pink as he impulsively went in for what he now realizes was his first kiss.

“It was nice, actually. Lightning’s lips looked so soft on the game’s box art. I just kinda imagined she was there with me, and now I’m not a virgin.”

Looks like a kiss wasn’t the only first Randy experienced that day. We kinda stopped talking to Randy Pumpo after that last remark. He was grinning too much. I suppose we shouldn’t judge, though, love can come from many a different place. As long as you’re happy, Randy.