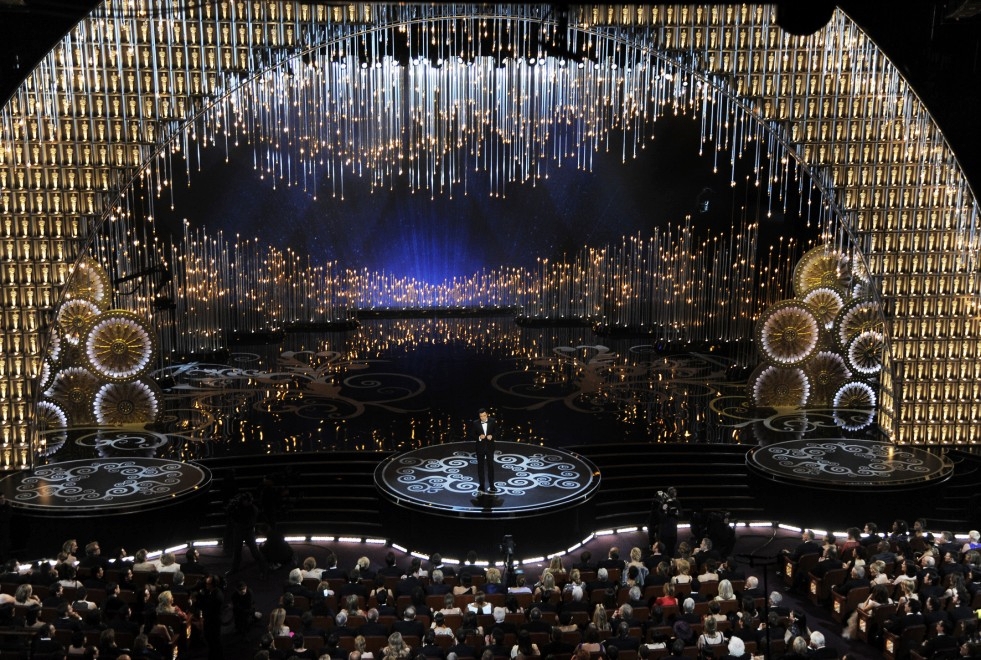 The room goes black. Nervous excitement steams a crowded theater until it’s thick with slightly inebriated chatter. The A-List adjusts their ties in the dark, feeling what used to be childlike wonder. First-timers are taking in the fever dream, letting all that gold fill their lungs, not quite affected by its weight yet. A spotlight breaks the pseudo-silence. Everything starts moving. It’s a show, and it has begun. You’re either wrapped in or you’re too anxious about all the cameras. All that gold and fanfare, spinning, swirling in a way that is far too exact for it to be whimsical but nobody notices except the old guard and the self-aware, self-loathing. The Academy has made their choices, and the room lies naked in their best clothing before them, praying for another justification to add to their reasons for leaving behind the beautiful release of one day being forgotten.

This has happened eighty-nine times before, but something underneath it all has cracked. It is undeniable. The show will go on, regardless. Human expression will always take precedence over the human, and this gold ship will go down as its own anchor by choice. Jimmy Kimmel takes his place, just as rehearsed. There isn’t a hair on his beard that is not aligned with the others. His teeth are freshly bleached; his hair is newly dyed. He looks far too exact to be whimsical, but nobody notices. The Everyman for our interactive glass is very dashing tonight, and his eyes glaze over when he receives his cue. He thanks the world for Her applause. It’s time to say the things he’s been paid to say. Those things that he truly believes.

“Good evening, and welcome to the 90th Annual Academy Awards!”

The cameras jump quickly to the jewel-encrusted mass that is loving the Everyman tonight, this special night. Hugh Jackman smiles a little and nods. Oprah is greeted to a thunderstorm of approval as she graces the giant screens in-house. The camera holds on her a little longer than it does the rest of the featured attendees.

“Now, before we begin, I just gotta say, and I think all of you will agree with me,” Kimmel begins, letting off the choke just a bit on his patented Everyman smile, “…that white people are very rich, and very powerful, and very bad.”

The gates are open, and Twitter, Tumblr, and Facebook are off to the races for the next four hours. Cameramen nearly stumble to get their shots of the grins that are nearly ripping apart the faces of the meticulously multicultural congregation of sweating beasts in exotic attire. God, if we could only see the serotonin pumping from their brains. They loved that. They loved that. They love that Everyman. He isn’t afraid to say what he thinks, and he’s so right. In fact, it’s self-parody, isn’t it? Oh, then it is so much sweeter. And yet, no one leaves their reserved seat. They might get another free glass of champagne. They left things behind to drink it. As long as they know it’s self-parody, nothing else need change.

“Another thing, I just gotta say, on a serious note, and I think all of you will agree with me,” Kimmel continues, shifting the product he offers into second gear, “…that we all used to joke about taking advantage of women sexually on this stage. It used to be a joke to us, but now it is bad. So many tragic stories of our industry have been told lately, and it is paramount that we all listen.”

Closeup of the most beautiful woman you’ve ever seen. Oh dear, she’s weeping, mascara forging a river down her smooth, yet chiseled and painted face. Cut to Oprah as she nods her head with confirmation, undercurrents of a lifetime of defiance.

“So, if you’re a fan of white men, you better live it up while you can, because you never know whose story will be told next!”

Hysteria. He says how he feels, and he’s always right, and God, is he funny. The first award hasn’t even been given yet, but this is already the greatest night ever, for all of us as people. Many of the first-timers let their online followers know this fact. They’re right. Always right. Never has there been more happiness and hope in a singular area in written history.

Good Ol’ Jimmy scoffs, sliding a hand down his face, careful not to touch the hair. Something…something’s just not…There were some whispers about how ratings have been…There were some whispers about a leak in the ship. He begins his next line. Everything goes perfectly. If this performance were to be judged, purely by the reactions of the souls in this prestigious Dolby Theater, it would get the highest marks available. There are no hitches. No outbursts except when appropriate. It’s all a trance at this point. Everyone has bought into the role they were destined to fill. A machine doing what it was born to do. Commercial break, and the guardians lay down their shields, if for a moment. Jimmy is woozy, but nobody notices. The everyman in him gasps for air, but the gold is too much. A few winners take too long to complete their tearful thank-you’s, and they’re played off with the most beautiful music you’ve ever heard. Someone who never thought they’d be here in America just won their first award, and before this night, nobody had ever heard of them, let alone recognized their work. The award will be truly cherished. They’re not one you’ll see again, though. They were not an A-list, and though it was their first time, they were not a first-timer. They were a one-off. Neither director nor actress, therefore doomed to the shadows from which they came, only to be sprinkled with light when a true artist wants to make themselves look appreciative. The most they’ll get is a namedrop in a James Gunn tweet.

The cameras are on. Jimmy walks back into center frame, as rehearsed. His eyes glisten as he sneers into the core of his hostages. The verified internet readies their empty update boxes; he’s about to fire another missile and it’s up to them to direct it towards who is most deserving of obliteration. The sound of steel cocking back against steel reverberates across a divided nation, nay, a divided civilization. His lips calm themselves, take their aim. Fire between the end of your breath and the beginning of the next.

Iron: That’s what blood tastes like. In small doses, it can be tolerable. When it fills your mouth all at once like it did to all of us as people when Good Ol’ Jimmy said that name, you begin to vomit. It’s too much. It’s too personal, and monstrous. Blood streamed freely from the mouths of the artists and those who pay money to artists so they be credited alongside artists. They vomited so much blood and champagne that they became ravenous. They needed more. Jimmy, give us more, they pleaded through the smokescreen of their minds.

It was a dose of the most potent drug available: Hate. Putrid, vapid and sharpened so exactly that it couldn’t be whimsical, but nobody noticed. Fuck him. Fuck that name and all who use it without allowing it to spew blood like a self-inflicted gash across the tongue.

All social media outlets nearly cave under the weight of cross-generational unity. This is the greatest night of all time. The Everyman has laid upon us Shakespearean comedy the likes of which shall never again be witnessed by organic flesh. Savage! Oprah steals the camera away from a man with a family to feed and begins to screech like Hell’s angriest, most oppressed harpy who demands her pound of meat. Americans from the Two Coasts begin to mail out their write-ins for the next presidential election. No bigot from the heart of the country is watching this right now, and boy, will they be sorry when they must bow to their first African-American female president. They will be sorry when they lose the war. Awards? They were handed out tonight. But the real heroes are not depicted on the silver screen. They’re the ones watching at home right now.

Jimmy Kimmel’s non-bigoted heart is racing. He’s done it. He’s made up for the trespasses of his ancestors. From atop the Hollywood mountain, his words flutter down with crystal ribbon wings and deliver hope down to the broken and forgotten, just as his rival Donald Trump’s did to those who revel in hypocrisy. He’s done it, but why isn’t he happy that it’s been done? Gold envelops the screens of millions and the lights dim as farewells are now in order. The A-List loosen their ties in the twilight. The first-timers come down from their first high, quivering below the waist. All that could be done to end divisiveness has been done tonight, from this stage, in this theater, by these perfectly constructed individuals. Art will save us from an unholy end. Art makes America great and Earth a stone to be proud of. Art has been rewarded for her hard work tonight, for the 90th year in a row. But there is still so much to be done. Jimmy looks down at his shoes after the cameras finally slumber and the righteous and courageous have left the building. They’re wet.