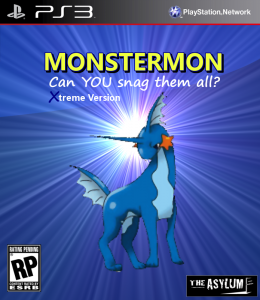 What a great and original concept.

BURBANK, CA – The movie business is slowly being overtaken by the video game industry in terms of profit and reach. Some movie studios, like Warner Bros., have already taken notice, and currently produce and distribute video games alongside their films. A smaller studio announced today that they, too, would be starting a video game division. The Asylum, famous for such summer blockbusters as Transmorphers, Snakes on a Train, and Paranormal Entity, want to broaden their horizons in an ever-changing entertainment market.

Shigeki Miyamota, the President of The Asylum’s video game division, held a press conference today exclusive to independent web publications. “I am very proud to be the leader of this bold new outfit,” Miyamota said. “The very studio that has inspired countless movie studios with its unique and original films, will now do the same in the video game world. In the upcoming year, you’ll see new and innovative games come to the PlayStation 3 and Xbox 360, games such as ‘Car Theft Autumn,’ the first person space shooter ‘Inevitibility,’ the platforming spectacle ‘Super Guido 3D Planet,’ and of course, the upcoming roleplaying games ‘Monstermon Xtreme and YOLO Versions.’ Of course, we know the US is not in a fortunate economic climate, so all of our games can be found for $5 each.”

After the conference, the journalists were brought backstage, where demo versions of each of the games were available to sample. I was able to test ‘Car Theft Autumn’ and ‘Super Guido 3D Planet.’ Car Theft Autumn was a top down game where you are able to kill civilians and steal cars. Often times, I found I could not be killed, or that I could drive through walls. Graphics were rudimentary as well, PlayStation One in quality being played on a PS3. Being as this wasn’t a finished product, I could forgive the quality. [Editor’s note: this was confirmed by Shigeki Miyamota to be the finished version of the game.]

‘Super Guido 3D Planet’ was an interesting game. As the brothers “Guido” or “Mamaluka,” you run around forested areas, spinning into boxes, collecting coins, and occasionally, getting a flying mustache that protects you from damage. Now I could have sworn I was just playing a romhack of Crash Bandicoot 2 with a different design scheme (I swore I heard ‘ooga booga’ when I got the mustache), but President Shigeki Miyamota insisted this is an all-original engine, and that graphic shortcomings were due to smaller budgets so they’d be more affordable, and he being and industry leader, I’m inclined to believe him.

The future is bright for The Asylum. Their bold, ‘think-outside-the-box’ ideas have shaken the movie business for years, so going into the video game industry was a wise move. Their sales model of keeping the budget, as well as the overall final price of the video game low, without compromising the quality of the product itself, is very admirable, and is sure to get them far in this competitive business.