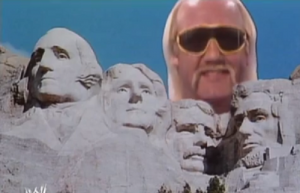 Pictured: one of the most iconic symbols of the United States, and Mt. Rushmore.

NOVATO, CA – 2K Sports has spearheaded the development of several popular sports game franchises, including the NBA 2K and NHL 2K series. The most recent addition to the 2K Sports family, WWE 2K, has been an enormous success for the past three years that the company has owned it. In particular, WWE 2K15 for the PlayStation 4 and Xbox One has sold over a million units, owing to the realistic graphics, the new-and-improved gameplay, and most importantly, its soundtrack, which was curated by the greatest wrestler who ever lived, John Cena. Wanting to keep the trend going, 2K Sports released a statement to the video game press this morning, saying that the greatest human being alive will be curating the next game’s soundtrack, Hulk Hogan.

2K Sports released a statement to dedicated followers of the WWE 2K franchise with the following: “Thanks to all of our loyal WWE 2K fans who have made 2K15 so successful! The game’s soundtrack, which was curated by John Cena himself, has been extremely well-received. With this in mind, we’ve asked The Immortal Hulk Hogan to compile a soundtrack that will be just as good for WWE 2K16. The track listing is as follows:
1.) Real American – Rick Derringer
2.) American Made – Wrestling Boot Band ft. Dave Meniketti
3.) Real American Made (mashup)
4.) I Wanna Be A Hulkamaniac – Wrestling Boot Band
5.) Voodoo Child – Jimi Hendrix
6.) nWo Theme
7.) Hulkster In Heaven – Wrestling Boot Band
8.) Cruiser-wait – Wiz Khalifa ft. Hulk Hogan
9.) Eye of the Tiger – Survivor
10.) Ravishing (Theme of Hulk Hogan) – Bonnie Tyler
11.) Real American (Orchestral Mix) – Jim Johnston
12.) They Don’t Know About Us – Brooke Hogan
13.) I Got 5 On It (A Day Without Pot Is Like A Day Without Sunshine Mix) – Luniz ft. Hulk Hogan”

VEAG had a sitdown interview with The Hulkster himself, giving his thoughts on the interview. “YA KNOW SOMETHING MEAN GENE, THIS SOUNDTRACK IS AT THE TOP OF THE POPS, BROTHER,” Hulk Hogan said, rubbing his left nostril. “I HAND PICKED ALL THESE TRACKS MYSELF, DUDE. SOME PEOPLE MIGHT SAY IT’S ME STROKING MY EGO, USING ALL THESE SONGS THAT ARE ASSOCIATED WITH ME DUDE, EVEN USING MY LITTLE KNOWN RAP SKILL TO SPIT WITH WIZ KHALIFA AND LUNIZ, BUT THE SIMPLE FACT IS THAT THE HULKAMANIACS WANT THE LEADER OF THE PACK, JACK. THEY WANT TO HEAR THE SAME MUSIC THAT THE HULKSTER LISTENS TO WHENEVER HE’S sLAMMIN 2000 POUND GIANTS IN FRONT OF 2.5 BILLION SCREAMING HULKAMANIACS AT THE PONTIAC SILVERDOME AT WRESTLEMANIA 3, PUMPIN’ THE IRONS, SAYING THE PRAYERS, AND EATIN THE VITAMINS, BROTHER. THEY WANT TO HEAR THE MUSIC THAT EATS TERRORISTS, SHITS OIL, AND BLEEDS RED, WHITE, AND BLUE, AND SMELLS LIKE THE US OF A DUDE. AND THAT’S EXACTLY WHAT I HAD IN MIND WITH THIS SOUNDTRACK, BROTHER.” Hulk then proceeded to leg drop and shatter the table, thus cutting the interview short.